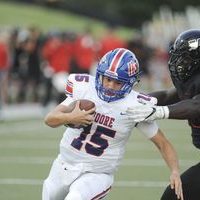 Coming into the season, Wilhite had yet to hit a field goal beyond the 27-yarder he made in the 2015 season-opener against Norman High. In three games, he’s already hit three further. He also made attempts from 29 and 37

We’d like to make the prediction more than four Sooners will make the All-Big 12 Team at the end of the season. ✍️ twitter.com/ou_softb…

We’ve upgraded our OU memorabilia game across the offices at the station. Which piece is your favorite? pic.twitter.com/al40…

ANOTHER great performance for OU women’s hoops. 16-2 on the season. twitter.com/ou_wbbal…

Less than 20 minutes until tip-off! Catch @OU_WBBall tonight on the road at West Virginia. #Sooners pic.twitter.com/4uQ2…