If something good happened in Norman over the past 100 years, there’s a good chance one or more Rotarians had something to do with it, said Don Adkins, long-time member of the Norman Rotary Club.

“That’s just a statement in fact,” he said. “If there was a project of community interest, people in the Rotary Club would be involved.” 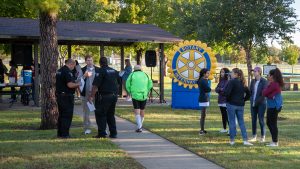 He and more than 120 Norman Rotary Club members are celebrating a legacy of community service as they commemorate their centennial year with special presentations and events planned through the spring of 2019.

Rotary International began in 1905 with the vision of Paul Harris, a Chicago attorney who formed a small organization of professionals with diverse backgrounds to exchange ideas, create lifelong friendships and give back to the community.

It didn’t take long before Harris’s dream made its way to Norman, where 22 charter members applied to start their own Rotary Club. The group, which included University of Oklahoma President Stratton Brooks, was officially established as Rotary Club No. 1949 on May 1, 1919.

The Rotarian movement continued to expand across the country and around the world. Today, Rotary has more than a million members affiliated with more than 30,000 clubs in 200 geographic regions.

Once established, the Norman club went to work immediately, forming a Boy Scout committee during its first meeting. Through the 1920s, the club treated children to annual Christmas movies, bought books for the fledgling Norman Public Library and installed playground equipment on a parcel of railroad easement that eventually became Andrews Park.

“Service above self” was the motto back then, and it continues to be the club’s purpose today, said Norman Rotary Club President James Chappel.
Members are using the centennial as an opportunity to celebrate past contributions and assess what lies ahead, he said.

“There’s a lot of excitement in the club,” he said. “What’s interesting is that the older group is excited to get here, while the younger group is looking for what’s next.”

Chappel said the club has already undergone a lot of change over the last few decades. The door of membership is more open these days. One of the biggest changes was in 1988, when the international body began permitting women to join local clubs.

Also, professional diversity is no longer a determining factor for potential membership. That means there are no longer limits on the number of lawyers, bankers, real estate brokers, retailers and other professional occupations.

The whole idea is to get people in and involved in service projects, he said. So, future policies and rules may be amended to ensure public service remains strong.

The centennial year will culminate on April 27, 2019, with a special dinner that is being planned at the Sam Noble Museum, he said. The keynote speaker will be Ron Burton, long-time Norman Rotary Club member and past president of Rotary International. Burton now serves as chairman of the Rotary International Foundation’s Board of Trustees.

Chappel said past and present Rotarians will be invited to attend the event as well as community leaders, who have been involved with Rotary projects and initiatives. There could be as many as 300 people there. The dinner will include a look into the future as well as a look at past accomplishments.
There is a lot of community service to look back on, said Mary Sherman, who became club president in 1995.

Sherman, who joined Rotary the year after women were first admitted, was personally involved in projects that provided South African students with laps desks and that created a micro-financing program for impoverished women in Peru. The club also contributed $25,000 to construction of the Sam Noble Museum in the mid-1990s, and a decade after that, it funded renovations at Norman’s Rotary Park, she said.

Other past projects have included tree plantings, Safety Town enhancements at Sooner Mall and a Kidspace playground construction at Reaves Park. The club also built the main building for Bridges, a Norman program that assists high school students who are homeless due to family crisis.

Money the Norman Rotary Club raises is returned to the community through nonprofit organizations that submit grant proposals each year.
Long-time member Adkins said Rotary is on the brink of reaching its primary objective as an international organization – the complete eradication of Polio, which has maimed and killed millions of people around the world.

Rotary has been at the front lines of that fight for nearly 40 years, and today, the number of reported polio cases is down to less than two dozen and is limited to only two countries, Pakistan and Afghanistan, according to the Polio Global Eradication Initiative.

“We will take the lead in responding to what the community’s and the world’s needs are,” he said. “What are those needs going to be in the future? I don’t know, but ‘service above self’ is part of Rotary, and we will rise to meet those needs.”

Head @OU_MGymnastics coach @wellsgymn is live with @jhale24 previewing the #Sooners as the No. 1 overall seed in the NCAAs. Listen: streamdb5web.securen…

Do you like the hire of Jennie Baranczyk as OU’s new women’s basketball coach? #Sooners pic.twitter.com/M7Ad…