By Perry Spencer on June 12, 2018 in Community Articles

After eight years, Gaberino’s Homestyle Italian and Wine Bar has found a new home in one of Norman’s most familiar locations.

The restaurant, currently at 283 34th Ave SW, will move into the former Chili’s location on Ed Noble Parkway. While numerous businesses and eateries have fled the Ed Noble Parkway area, owners Laura and Mitch Duprez have faith in the location and its future. 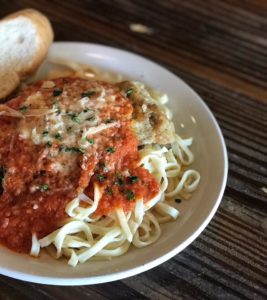 “I still think it’s a great area of Norman,” Laura said. “Areas are cyclical. I know Ed Noble Parkway was affected by all the Lindsey Street construction, and it was a dead end for almost two years, so it really did put a strain on the businesses here. Right now, we just feel like we’re doing what we needed to do, and we definitely wanted to stay in Norman.”

The location of Gaberino’s may be new, but the home-style Italian fare will remain the same at the new building. Because of the additional space, fans of the restaurant can expect to see new items and a bigger area to enjoy.

A MAIDEN NAME AND A DREAM

Laura grew up in Oklahoma City with an Italian mother who loved to entertain and host big dinner parties. She said she learned the secrets of Italian food while helping her mother in the kitchen, and the love of pasta and sauces was ingrained in her soul.

“I was always my mom’s sous chef and silver polisher and table setter, so I kind of learned how to cook and host growing up,” Laura said. “I always worked in restaurants as a part-time job in high school and in college. And that’s how I met my husband, Mitch. We worked together in a restaurant in Norman.”

“He thought he was going to go be a teacher, and I thought I was going to go into the medical profession as a physician assistant. We tried that and then neither of us decided to go with those routes. So, we fell back on what we knew, which was restaurants.”

Today, the Duprez’s have had a successful restaurant for eight years. Gaberino was Laura’s mother’s maiden name, and the Italian food recipes are old family secrets. While cooking was the easy part, learning to manage a growing business was a challenge.

“Working in the restaurant, serving the customers, cooking the food and all the other hands-on aspects were natural, but learning the business aspect was harder,” she said. “I think our food is exceptional. I think our food is memorable. It’s not just good – it’s as good as it gets without being fancy.”

Every dish is made from scratch, and the most popular dishes include the meatballs and the chicken Florentine lasagna. Gaberino’s also serves a seasonal menu for all four seasons.

“We had our spring menu, which included a creamy asparagus soup and a shrimp and asparagus risotto,” Laura said. “In the summer, we do a Bruschetta, and in the winter, we have the chicken tetrazzini. The seasonal stuff is more intricate. I wouldn’t call it fancy, but the recipes definitely require more attention.”

When Gaberino’s opens at 400 Ed Noble Parkway, fans will see much-needed changes. In addition to a larger kitchen that can also support growing catering and food truck enterprises, a full bar and private event space will also be added.

Laura said she is especially looking forward to having a patio space added to the restaurant as well.

“The food will be the same, though we might add a couple of menu items like new appetizers and desserts. I’m going to retain the ambiance that we have here, like including the interior window panes and art,” she said. “It’s going to have that warm, comfortable homey feel.”

Laura said people were surprised she decided to relocate the restaurant to Ed Noble Parkway, but for her, it made the best sense.

“It’s got great visibility and it’s easy to get to,” she said. “We’ll have a special event room as well. We’ve hosted parties like birthday parties and anniversary celebrations that have up to 50 people. But it takes up our entire dining area. The new space will accommodate that as well. So, there’s just a lot of potential for growth, and I think it’s going to allow us to stay successful.”

If the new Gaberino’s also inspires other business owners to take another look at the Ed Noble Parkway area, even better, she said.

“We are glad to be investing in this part of Norman, and hopefully other businesses or new businesses will follow and maybe be encouraged by what we’ve done,” Laura said. “We can be a part of the revitalization of that area.” – BSM