By Perry Spencer on July 2, 2018 in Community Articles

In early 2010, Gary and Jessica Cavins used their tax return to buy a lawn mower, edger and weed-eater to open Cavins Landscaping. Starting the business with “absolutely nothing,” as Gary says, those early years were a lot of hard work and required some sacrifices.

“We lived off Jessica’s teacher’s salary from Longfellow Middle School for three years and put every cent back into the company.”

Working sunup to sundown, the Cavins were committed to building their business. 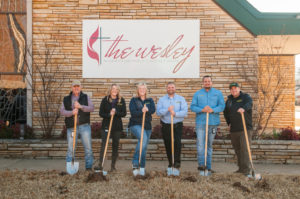 “We would dream about it and talk about it and pray about it,” Gary said. “We bounced ideas off each other and although we don’t always agree, we stand by each other, no matter what.”

Two years later, with Gary’s background in electrical, general maintenance and roofing, the mowing stopped, and they transitioned the company into residential and commercial remodeling. Gary took on the role of president and CEO and Jessica as the executive vice president.

“My dad was in the roofing industry and my grandpa was in the construction industry. My mom has a degree in construction science and a masters in human relations, so I grew up around all that,” Gary said.

Jessica said working together is fun. “We’re together all the time, probably 20 hours a day. Our offices are next to each other, and we have lunch together every day.”

With a large investment in equipment such as tractors, scissor lifts, light towers, assorted trailers and trucks, Gary said they have the tools and capabilities to do just about everything. They made the decision in 2016 to invest money into a large building on Atchison Drive, off of U.S. 77.

Surrounded by a core group of sub-contractors, including electricians, plumbers and heating and air specialists, the company is ready for any type of call, day or night, Gary said.

“I called Gary about 11 p.m. because there was some urgency to getting the building secure,” she said.

Gary and his team came out, assessed the situation and stayed until the building was secure. The next morning, they discovered serious structural issues that turned out to require seven months to repair.

“I would not have wanted to work with anyone else,” Haws said. “They are diligent, great communicators and went on daily walks around the property with me. I am grateful for their relationship and patience.”

In August, the company marked its eighth anniversary, and the Cavins decided to discontinue residential work and focus on commercial remodels full time.

“It seemed like the right step in the evolution of what we were doing, and we wanted our business to continue to grow,” Jessica said.

Apparently, they made the right decision as the company experienced its best quarter ever at the end of 2017.

“The construction industry is booming right now, and it’s hard to find great people, so we are lucky,” Gary said.

“We have the best team,” Gary said. “We’ve had great people along the way, but our team now is the greatest team we’ve ever had. They are very educated in construction technology and are hands-on and incredibly smart, high-powered individuals.”

All managers go through extensive training and certification to assure job sites are safe and meet important standards.

“A lot of learning is on-the-job, but additional training helps keep the team current on new products,” Gary said.

Cavins Construction does a lot of work on Campus Corner too, turning old buildings into something new. Gary said he has garnered a lot of education in those older buildings.

“You have to learn to fix things a different way. You have to figure out how to fix what was built 80 years ago and bring it up to code and make sure everyone is happy.”

Jessica’s favorite project was Get Air, a trampoline park inside Sooner Mall. Gary says his favorite was work they did on some loft apartments. That building is one of the oldest on Main Street, and Gary says the project taught him about his strengths and weaknesses.

“I could write a book about that job,” Gary laughs.

“It’s been a journey since day one, and it’s always changing. We don’t settle, and we are always improving,” Jessica said.

“It’s been an adventure because every day can change with just one phone call,” Gary said. “I was at my desk at 6:30 this morning and received a call from one of the sororities on campus letting me know their sprinkler lines burst and the entire first floor was flooded. That changed my plans for the day,” he laughed.

Despite all the changes for the company, one thing has remained consistent.

“We love Norman and wouldn’t call any other place home,” Jessica said.

“Norman has shaped our business, and we are now blessed to be able to give back to the community that’s given so much to us,” Gary said. – BSM