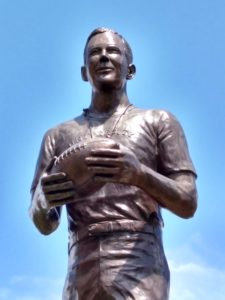 The new south end zone addition at the Gaylord Family Oklahoma Memorial Stadium added 1,800 new seats, but some of its most impressive renovations are tucked away beneath the stands.

The Barry Switzer Center is now open to visitors.

On April 24, 1999, the original Barry Switzer Center was dedicated on the site in honor of the coach who was known at the time as the winningest coach in OU football history. He had led the Sooners to 157 victories from 1973 to 1988.

The space served as the focal point of OU football preparations with training facilities, locker rooms and offices, not to mention the program’s extensive trophy collection. Expansion of the stadium meant expansion of the Barry Switzer Center, which held an open house on May 5. 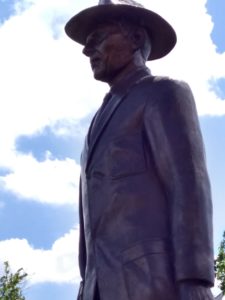 Visitors to the center strolled along Lindsey Street onto the new park grounds where the practice field once was. Four titans of OU coaching history stand in bronze. They include the legendary Bennie Owen, who laid the foundations of the Oklahoma football program and served as the most years as head coach; Bud Wilkinson, whose record 47-game winning streak from 1953 to 1957 has yet to be broken; Switzer, who came out of coaching retirement after OU to head the Dallas Cowboys; and Bob Stoops, who replaced Switzer as OU’s winningest coach with 190 wins upon his retirement in 2017. Each of these four coaches won more than 100 games, a record number in any college football program.

The long, polished hall of the new Barry Switzer Center greets visitors with a tidal wave of awards. Up front are the seven national championships. The football-shaped glass sparkles under the lights. Seated just below these are the Big 12 trophies. A must-do photo opportunity for visitors is the “Take a Selfie with the Sooner Trophies” kiosk. Groups can gather around the display to snap a photo with a specially mounted camera, offering filters and the ability to text the photos to their phones.

Behind the national championship trophies, a glass-guarded shelf shows off the enormous collection of championship rings. The opposite wall is packed with display cases for the many bowl trophies OU football has assembled over the years, each unique from the bronzed-helmet trophy of the Gator Bowl to the many bowls packed with oranges. 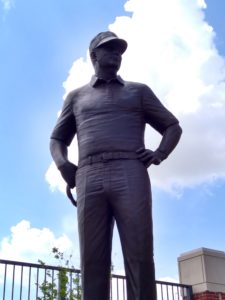 The Barry Switzer Center is more than just a trophy case, however. Informational kiosks about all aspects of the OU football program blossom at the touch of a finger. “All-Americans” serves up photos and details of each of the 162 first-team All-Americans from the program’s history, dating back to fullback Claude Reeds in 1913. “Sooners in the NFL” showcases players who have gone onto professional league play after leaving their Oklahoma roots. Visitors may also learn more about the university itself in “OU: A Complete Education” to see the busy schedules of student-athletes.

One of the most entertaining kiosks is the “Sooner Football 360 Experience.” Thanks to special cameras digitally assembling complete views from every angle, visitors may ‘tour’ numerous sites within the stadium, all at the touch of a button. Without taking a step, visitors can check out the locker room, team meeting room, the cold plunge and hydrotherapy room and even coach Riley’s office. 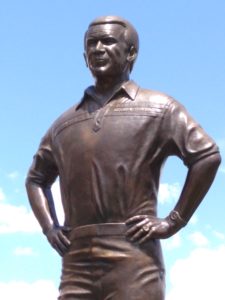 Many of the items are from the coaches themselves, such as Barry Switzer’s famed jacket and Bob Stoops’s visor. Other items are pulled from the wider history of the football program, like a piece of the goal post torn down following the 1956 OU-Texas game, the silver shoes of running back Joe Washington and a booklet from the first fundraiser for a stadium at the University of Oklahoma, where dreamers in 1925 were hoping to seat 16,000 people. One can only imagine what they would think of today’s stadium of 86,000 seats, along with the broad collection of trophies housed at the stadium’s new south end.

Examining How A Carmelo Anthony Trade Could Work
Noel: Russ, Paul Recruited Me