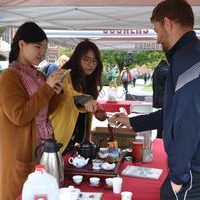 She grew up, she says, in its “hometown,” where Chinese first began widely mixing tea leaves with boiling water. It has been a tradition for millennia, as were many aspects of Thursday’s Chinese Culture Festival and Confucius Institute Day on the South Oval of the University of Oklahoma.

“The most important part of Chinese tea is simplicity,” Yue,