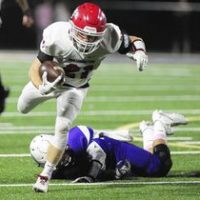 • Can North keep it going: Even before the Class 6A split, Norman North and Moore played in the same district.

Playing every year, the Timberwolves have won the last 11 against the Lions, but the victorious run has had some bumps along the way. Even while Moore compiled a record of 18-92 during those seasons, and North became a west-side power, the

Oklahoma football: Head game another weapon for Sooners in Bedlam
A Ranking of the 2017 Big 12 Defenses Reveals Very Different Trends Heading Into Bedlam