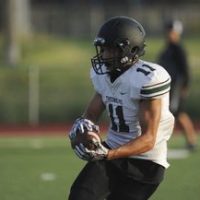 Peoples had to sit out last season after being ineligible due to the transfer, which occurred following his sophomore season. During that season, he completed 42 percent of his passes