By Perry Spencer on April 26, 2018 in Community Articles

As entertainment and events in downtown Norman have grown and multiplied in recent years, Norman dentist Gabriel Bird and other Norman Arts Council board members have observed a recurring problem. There never seems to be enough room for food trucks.

The Norman native has taken that concern to heart, and he is taking action by developing Norman’s first food truck park adjacent to his new dental office now under construction at 227 W Main St.

He is building the park on the site of the long-abandoned Long-Bell Lumber Company, which served Norman’s early-day home construction industry. The site was a blight on Main Street for decades, and Bird is now happy to redevelop it into something that will benefit the community. 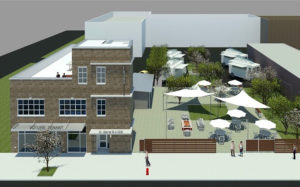 “I love Norman, and was born and raised here,” he said. “I’ve driven by that lot long enough to be sick of it.”

However, in recognition of the lumber yard and its historic role in Norman, he’s naming the lot TOLY Park, which stands for The Old Lumber Yard.

While TOLY Park’s development will continue through much of the year, it will be functioning and operational in time for downtown Norman’s 2nd Friday Art Walk on April 13 and the Norman Music Festival, April 26-28.

In fact, Bird is planning a grand opening and food-truck social event on April 13 at 4:30 p.m., just before 2nd Friday festivities get started.

Bird said his office and TOLY Park will be the first new developments built in downtown Norman since 1973, and he believes his park will help fuel downtown’s continuing growth as an entertainment district.

The park will be large enough to accommodate up to four food trucks, and it will feature benches, tables and chairs to help patrons get comfortable. There will be shaded areas under giant umbrellas, arbors or trellises and there will be a free-standing building where people can purchase wine or beer.

TOLY Park’s design is being modeled after parks he has seen in other cities, such as the Bleu Garten in Oklahoma City’s Midtown District, known for its ambiance as a clean, entertaining venue where patrons can find good food and a unique outdoor dining experience.

“We have all sorts of big ideas for all the things we can do out there,” said Bird.

There will be music, and perhaps, even movie nights. But, he doesn’t want the entertainment to be too loud or distracting.

He envisions TOLY Park as a destination point and another attraction to draw people to downtown Norman, and he hopes to help change the way people view downtown.

“We want people to come downtown to see what’s going on. We want it to become a destination,” Bird said.

“Anything that brings people downtown is exciting, and this will fit in perfectly with the entertainment district that already exists,” said Schemm, whose offices are downtown at 309 E Main St.

Schemm said the park helps give an end-to-end experience to downtown. There are new breweries that have either opened or will soon be opening on the east side, and there are new restaurants, such as Tino’s, The Winston and Neighborhood Jam on the west side.

“Downtown Norman already has so many things to experience, and the new food truck park just enhances what is already an amazing, must-see district,” he said.

Bird, a 1998 Norman High graduate is in his 11th year of practicing dentistry in Norman. He said his plan to develop a food truck park was serendipitous.

When he outgrew his current office at 112 S Berry Rd., he chose the abandoned lumber yard as his new office location. The lot size was larger than what he needed for his 5,500-square-foot dental office building, so he decided to create a food truck park with the remaining space.