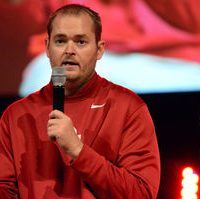 When you think of “most underrated Sooner” who’s the first name that comes to mind? pic.twitter.com/ZGjd…

There’s only one Big 12 player to hit 400 career 3-pointers. Her name is Taylor Robertson and she plays for OU. @T_Rob30 @SoonersCoachJB @OU_WBBall pic.twitter.com/G8Lj…

We’d like to make the prediction more than four Sooners will make the All-Big 12 Team at the end of the season. ✍️ twitter.com/ou_softb…