By Josh Helmer on July 5, 2018 in Community Articles

When Eric Dissell, Sean Simpson and Josh Simpson get together, its hard to know when the fun ends, and when work begins.

The three guys love golf, and they used to spend hours together at Westwood Golf Course, but they weren’t always hitting tee shots. They spent a lot of time behind the counter serving burgers and beer or behind a mower, trimming the greens. 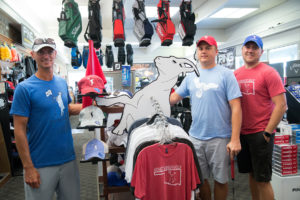 While their jobs may be different now, their close relationships haven’t changed. They’re now working together on a new venture, establishing Goat Ranch Golf Co., which offers a full line of golf apparel with a humorous twist.

“We’re all golfers, so anytime we’re golfing and something funny or something happens that we’re like, ‘Oh, we need to make a note of this, we’re always texting each other saying, ‘This would be a really good saying on a shirt’,” Sean Simpson says.

Most seasoned golfers know that the company’s name is a riff on classic golf jargon. Dissell explains that while larger courses with abundant landscaping budgets can keep pristine greens, smaller “goat ranches” have to stretch a tight budget to maintain tee boxes.

“The golf community knows what a goat ranch is,” Josh Simpson says. “And they like the logo, and then they like the concept. It’s kind of a novelty idea, and also a really cool hat.” 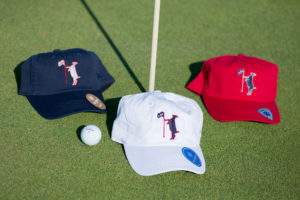 Besides the inside joke embedded in the company’s name, the clothing line idea itself originated as a joke between brothers Sean and Josh while they drove to a golf tournament. From there, the idea continued churning in Sean’s mind, solidifying the moment he shared it with Eric, a greenskeeper by day and artist by night.

With Eric’s enthusiasm and artistic talents behind the idea, the trio decided to run full steam ahead with Goat Ranch Golf Co. Josh contributed his legal knowledge as a full-time lawyer, so the company could become official by the end of 2017, and the first hat design came out in February 2018.

At first, the three co-founders made each t-shirt by hand, an arduous process that required simplified designs. Now, they are working with a local screen printer to bring their t-shirt ideas to life, as well as Norman-based collegiate apparel firm Top of the World to produce their embroidered hats. 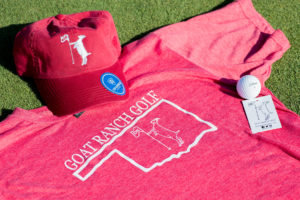 “I think it gives us a little bit of credibility because it’s like, ‘Oh, this isn’t some cheap one-dollar hat that they’ve ordered online and they’ve sewn on,’” Sean says. “It’s a real national hat company making our stuff.”

Aside from just-for-fun designs, Goat Ranch Golf Co. also sets itself apart with a more casual and affordable approach to golf apparel than the well-known, exclusive lines. Sean says their aim is to reach the everyday golf wear market, a largely untapped section of the golf clothing market.

“It’s fun. It’s different. You don’t see a whole lot of stuff like ours around,” Eric says. “And it’s good for everyday wear, too.”

At the moment, Eric, Sean and Josh continue pursuing their full-time jobs while devoting their spare time to Goat Ranch Golf Co. With a team of longtime friends all equally dedicated to their new pursuit, communication is easy, and bringing new ideas to fruition takes no time at all.

Eric can draw new ideas during the day, and by the time Sean makes it home that night, he can create a digital file and send it off to the screen printer or Top of the World. From start to finish, t-shirts can hit the Goat Ranch Golf Co. website in a week or less. 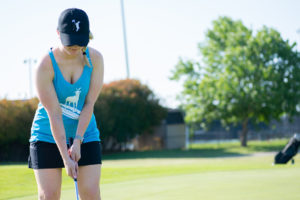 “It’s nice when you see your stuff outside,” Eric says. “And for me as the artist, seeing your stuff on a hat, on a shirt, it’s weird to me.”

Since launching in February 2018, Goat Ranch Golf Co. has attracted attention from fans in far-reaching pockets of the country. Social media helped one Arizona golfer find this Norman-based clothing company before the team had even set up a PayPal, invoicing and shipping system. After this initial surprise customer, Goat Ranch Golf Co. has sent hats and shirts out to Kentucky and Florida, and a man from Moore remains their most loyal customer.

“My initial goal was to make 12 hats a month and have a website up by the end of the year,” Sean says.

Goat Ranch Golf clothing is available at the Westwood Golf Course and can be ordered online at goatranchgolfco.com. – BSM