By Josh Helmer on November 9, 2018 in Community Articles

Marquise Brown’s introduction to football was different than most. It simply started with a costume. When he was just 4 years old, he got a Dolphins jersey to wear for Halloween and ended up wearing it every day.

That was all it took to launch a passion for a sport that has challenged the Hollywood, Florida product as much as it has blessed him.

The junior wide receiver knows a thing or two about challenges. On Saturdays, we cheer and celebrate the speed and big-play ability of the flashy playmaker, but the path that Brown has taken to get to this level is one that constantly reminds him of how truly blessed his life has been. 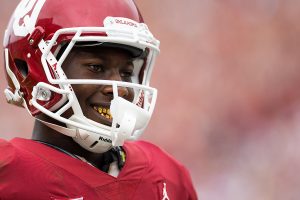 “Anything I’m doing now is better than I was doing before, so I better take advantage of it,” Brown said with his trademark smile.

He started as a running back, and as time progressed, he moved to receiver. But there was never a doubt who was the fastest player on the field any time he was involved. It was always Brown.

As his high school career at Chaminade-Madonna College Prep ended, the scholarship offers to play football at the next level were not rolling in. Grades were a major factor as was his weight, which hovered around 140 pounds.

“I didn’t have anyone to walk me through it all, truly understanding the NCAA clearing house and all of that,” Brown said of his options after high school. “Once I found out all of that, I took my ACT, but it was really late. I had walk-on opportunities but decided to go to JUCO.”

Brown went from Hollywood, Florida to just outside of Hollywood, California to play at the College of the Canyons in Santa Clarita. He had to get a job and he didn’t have a car to get him to and from practice or work, but the lack of transportation never stopped him from showing up.

He would walk from school to his job at Six Flags Magic Mountain, and he never missed a practice. At Six Flags, he started out at Bugs Bunny World, an entry-level assignment where new employees deal with children and families.

“I loved working with little kids, getting them on the rides, helping them strap up,” Brown said. “It was fun.”

Brown would eventually earn a promotion to work on the Full Throttle ride, but bigger and better things were on the horizon. His play on the field was catching the eyes of college recruiters, inching him closer to an even bigger promotion. Brown had registered 50 catches for almost 800 yards and 10 touchdowns and had become a force in the kick and punt return game. It caught the attention of University of Oklahoma receivers coach Dennis Simmons. 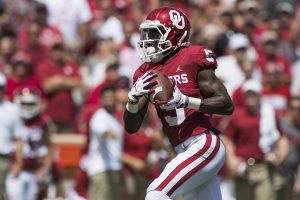 “His JUCO coach reached out and said we have a kid who’s special. We pulled up the video and it was very evident he was fast,” Simmons said. “He is such a soft-spoken quiet kid. It was like pulling teeth to get anything out of him. But once I went out there and saw him practice, our relationship just grew from there.”

As has always been the case, it was his speed that caught a lot of attention. At 10 years old, he picked up the nickname Jet because he would run by everyone.

“We were doing some things, one on ones during spring ball,” Simmons said. “A defensive back had leverage, but when he came off the line it was a blur. I was wowed. He is fast.”

Head Coach Lincoln Riley knew he was fast, but the problem for Brown early on as a Sooner was that maybe he was playing a little too fast.

“When he got here, he was always fast. You loved that. You would much rather have a guy playing fast all the time,” Riley said. “But he was just out of control when he got here. He was falling down on routes. It was fast, but it was like, ‘whoa, you’ve got a great weapon, but you’ve got to learn how to use it.’”

The process to become a complete receiver has driven Brown from the moment he stepped on the field at OU. He has always been the fastest player on the field, but in turn, he has also been the smallest.

“His mentality is incredible,” Simmons said. “We heard it all when he got here, he’s 146 what are they doing. The good part for us is we got to know the 146 before he got here, so we knew what he was capable of.”

Benny Wylie, the Sooner’s new director of Sports Performance, has built a strong relationship in a short amount of time with the Sooner standout receiver.

“I have had some great wide receivers that were told they’re too small, and they’re all wired the same way. You can’t tell them they aren’t 6-2, 200,” Wylie said. “That gives them that spark, that intangible. He’s a little irritated every time he steps on the field. He has a chip on his shoulder that allows him to play at a high level, even bigger than he is.”

For Brown, those who question his size are motivation for him.

“I refuse to think about it,” Brown said. “I watch film. I watch guys my size, and I’m like, he can do it, then so can I. I watch Antonio Brown, Tyreek Hill, Tavon Austin. I watched them growing up and, if they can do it, I can do it.”

Brown’s transformation into a complete receiver has caught the attention of the NFL. On any given Saturday, scouts from all across the NFL flock to Norman to get a first-hand look at the kid they call Hollywood. NFL.com listed Brown as the most intriguing prospect that would be draft eligible at the end of the 2018 season. But, for Brown, it’s all about improving every day.

“It’s all about consistency and taking it day by day, taking each day for what it is, a day to get better,” Brown said.

The hard work and dedication to perfecting his craft has been a pursuit his teammates have noticed as well.

“He’s trying to prove himself,” starting quarterback Kyler Murray said of his receiver. “He wants to play at the next level like everybody else. He can’t be a one trick pony. For scouts to take the chance on a small guy, you have to do those things. He’s doing them well right now.”

Marquise “Hollywood” Brown has overcome a lot to get to this point in his career. His speed has obviously been a factor to elevate him above the rest, but he is more than just a fast receiver. He is working to become a complete receiver.

“To be honest, I’ve watched this team the last few years with Lincoln, Ruffin (McNeil), Dennis, Bill (Bedenbaugh), so this has been my team for the last couple of years, and I’ve been tuned in,” Wylie said. “I see this Hollywood guy and you hear all this stuff. Hollywood, flashy, gold, all this stuff, I was expecting something different than I got. What I got was ‘Yes, sir’. He’s a very humble young man.”

Hollywood Brown has wowed the Sooner Nation for the last two seasons, but his work ethic and humble ways may help pave a path where the best is yet to come. – BSM

Carl Albert product and preferred walk-on QB @ben_harris18 is live with @jhale24 and @stevermarshall discussing his decision to pick the #Sooners. Listen: streamdb5web.securen…