When he turned 17, there was no question in his mind – he was joining the infantry, and he wasn’t looking back. Now, as a recruiter for the Oklahoma Army National Guard, Chin has the opportunity to help graduating students decide whether joining the military is the right option for them.

Chin was born in England but moved to Jamaica with his parents when he was very young. After his 17th birthday, he hopped on a plane back to his home country and joined the British Army. He served four years, traveling all over the world. It was a fast-paced life, but it suited him well. 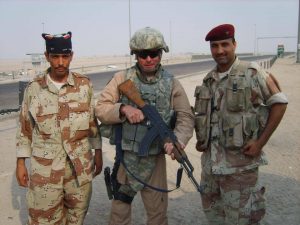 The now Moore resident admits that he probably wasn’t the most disciplined child when he was younger, but joining the military right out of high school taught him an important lesson about the kind of man he wanted to be.

“In the army, I learned how to count on other people and have other people count on me. It really turned my life around, being a part of something bigger than myself.”

After serving in the British army for four years, Chin was ready for a change. He decided to move across the ocean and join his older sister in the United States. Enlisting in the U.S. military seemed the next logical move, and soon he was at an army base in Fort Knox, Ky., learning how to operate tanks.

Chin served in the Army for three years before returning to civilian life, where he tried his hand at being a commercial diver. The job stuck, and he found that the experience was surprisingly similar to his life in the military. Most of his coworkers were veterans and the dangerous, nomadic lifestyle created a camaraderie similar to what he had experienced during his time in the Army. 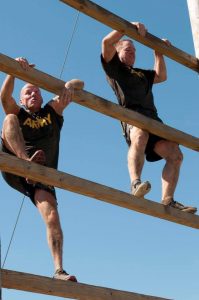 In 2005, after being a commercial diver for about 10 years, Chin felt called to join the service once again, and enlisted in the National Guard as a medic, but before he could start training, he was called to assist with the Hurricane Katrina relief efforts. In fact, Chin was on his way home from a diving trip off the coast of Louisiana when he got the call to assist with the relief efforts. He promptly turned around and headed back to find the area completely devastated, unrecognizable from the place he had left just two short days before.

After going through six months of medic training at Fort Sam Houston in San Antonio, Chin served a tour of duty in Iraq in 2007. He was offered a full-time position with the Oklahoma National Guard when he returned to the United States and didn’t have to think twice about accepting. Now, he works as a recruiter out of Edmond, visiting schools all over the area to talk to potential recruits about what it means to be a part of the National Guard.

The National Guard is made up of men and women of every profession imaginable, all working together to be a part of something bigger than themselves. 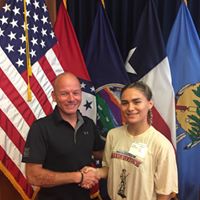 “All of my mentors have told me that it’s not about the numbers, it’s about the individual people,” said Chin, who keeps in touch with every single Guard member he recruits. “A good recruiter will push you to do what’s going to benefit you. I love helping connect people to the opportunities that are right for them.”

Chin provides information about the opportunities that the National Guard has to offer on both Facebook and Twitter as @recruiterchin. – 19SM

Oklahoma vs. UTSA: Preview, Game Thread & How to Watch
Helicopter injures one during landing at Reaves Park

.@jhale24 is live on the postgame show now trying to help @Tyler_McComas, @JoshOn1400 and you make sense of what the heck just happened in Norman. Listen: streamdb5web.securen…

FINAL: 38-35, Kansas State. Spencer Rattler is picked off for the third time today. Kansas State rallies back and beats Oklahoma for a second consecutive year. #Sooners

Last gasp for OU as the defense gets a stop. :49 remaining in Norman. #Sooners trail the Wildcats, 38-35.