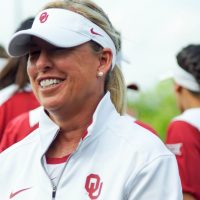 No. 1 faces No. 9 in an in-state clash. Happy Friday, friends and fans!
Patty Gasso and her No. 1 Oklahoma Sooners (40-1) softball team are gearing up for a top 10 Bedlam series showdown in Stillwater against the No. 9 Oklahoma State Cowgirls (37-6) beginning tonight at 6 p.m. CT on ESPN+. Needing just two wins this weekend, OU has a chance to secure its ninth straight Big 12 regular season title and the program’s 19th conference crown overall.

Dating back to the 2011 season, OU has bested OSU in 24 consecutive meetings and has claimed the last eight series overall. All-time, the nation’s No. 1 squad leads this Bedlam series with a record of 94-65.
Coming into this marquee matchup, Oklahoma is ranked No. 7 in the NCAA Softball RPI, while Oklahoma State is right behind the Sooners at No. 8. With that in mind, this series has a chance to be OU’s most valuable in terms of the opponent’s strength, and considering the Cowgirls also swept the No. 12 Texas Longhorns earlier this season, this is undoubtedly a meeting of the Big 12’s two best teams.
While tonight’s game is subscription based (ESPN+), you can watch the contests on Saturday and Sunday on ESPN and ESPNU at 3 p.m. and 11 a.m. CT, respectively. Good luck, ladies! Boomer!

Now onto this week’s Friday edition of Hot Links! A pair of Sooners receive 2022 mock draft hype, Oklahoma Baseball hits the country road, TB12’s first professional TD ball is going up for auction and more!
OU Links
According to Pro Football Focus’ Mike Renner, QB Spencer Rattler and EDGE Nik Bonitto are projected to be top 10 picks in the first round of the 2022 NFL Draft. Obviously a million things will probably change between now and then, but this kind of attention is big time for the Sooners.

Lincoln Riley was recently asked about possible expansion for the College Football Playoff. According to the head coach entering his fifth year at the helm, he believes expansion is ‘inevitable’. Sooners Wire’s Josh Callaway has more.
Speaking of Riley, he recently touched on his approach for recruiting quarterbacks. Whether it’s been players from the NCAA Transfer Portal or prospects straight from the prep ranks, there’s a meticulous method to the mania. SI Sooners’ John Hoover has more.
Former Biletnikoff Award winning WR and Heisman Trophy finalist Dede Westbrook is reportedly receiving interest from a number of teams after suffering a torn ACL more than six months ago. I say send him to the Cleveland Browns and let’s watch that dynamic duo reunite.

OU Baseball (22-21) is resuming conference play with a three-game road series against the West Virginia Mountaineers. First pitch is scheduled for tonight at 5:30 p.m. CT and all three games will be available for streaming on Big 12 Now on ESPN+.

Around the Sports World
Texas Longhorns LB Jake Ehlinger — the younger brother of QB Sam Ehlinger — was reportedly found dead near the UT campus on Thursday. Austin authorities have not released many details, but as of this time they do not consider the cause of death to be suspicious. Just an awful, heartbreaking development for the Ehlinger family.

On Thursday, the Los Angeles Angels shocked the baseball world by releasing the 41-year-old Albert Pujols from his contract in which he was already in his final year.
The football Tom Brady threw for the first touchdown pass of his NFL career will soon be up for auction after a fortunate New England Patriots fan has held onto the piece of sports history for nearly 20 years.
With the Chicago Bulls and Portland Trail Blazers now finally allowing limited fan attendance for their home games, NBA Insider Marc Stein is reporting that 29 of 30 teams are housing reduced crowds as we near the playoffs. Only the Oklahoma City Thunder will refrain from opening its doors to fans until the start of the 2021-22 season.
A Montgomery, Alabama high school softball game between Park Crossing and Lanier broke numerous state records after a total of 91 runs were scored. Yes, you read that right.