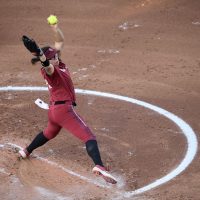 Also, former Sooners are lobbying for Dede Westbrook to join them in Kansas City. Happy Monday, friends and fans!
Inside USA Softball Hall of Fame Complex in OKC, the top-seeded Oklahoma Sooners will compete for a Big 12 Softball Tournament championship beginning Friday, May 14.

Once again, OU will enter the conference tourney as the No. 1 seeded team in the league. First up for Patty Gasso’s group in Pool A will be the four-seeded Baylor Bears at 2 p.m. CT, followed by a match against the six-seeded Texas Tech Red Raiders at 7:30 p.m. Check here for a full layout of this year’s bracket.
With a weather cancellation in 2019 and the COVID-19 pandemic cutting the 2020 season short, an official winner of the annual Big 12 Softball Tournament has not been named since 2018. OU has won three straight league titles via this format, and seeks to claim the program’s seventh such title before NCAA Regional play begins later this month.
Now onto this week’s Monday edition of Hot Links! OU Softball owns Bedlam and the Big 12, safety play intensifies at Oklahoma, Gronk gives back and more!
OU Links
This weekend, after dropping Game One in Stillwater, No. 1 Oklahoma rallied to win the next two pulse-pounding Bedlam contests against the No. 9 Oklahoma State Cowgirls to not only win the series but also to claim the program’s ninth straight Big 12 regular season title. The Sooners now carry a 42-2 record into the 2021 postseason. Congrats, ladies! Boomer!

Oklahoma Baseball also had itself a fine weekend on the diamond, winning two of three games in Morgantown to claim a series victory over the West Virginia Mountaineers. Up next, the Sooners will reunite with OSU in Tulsa on Tuesday, May 11.
Since he stepped on the scene in 2019, junior CB Jaden Davis has been a relatively steady presence in OU’s secondary, but he’s confident that this year’s version of himself will be the best yet. That’s great news for cornerbacks coach Roy Manning, who is enjoying the most depth he’s had at the position since he joined the staff, writes SI Sooners’ John Hoover.
Hoover also wrote about senior safety Pat Fields and how his absence from spring ball opened a door for several players to gain ground in the battle for reps in the secondary.
Several Kansas City Chiefs players are reportedly openly recruiting free agent WR Dede Westbrook to join them in KC, including former Sooners TE Blake Bell, LS James Winchester, OT Orlando Brown Jr. and center Creed Humphrey.

Around the Sports World
At 6’4, 229 pounds, Seattle Seahawks WR DK Metcalf recently clocked a 10.37 100 meter time in an Olympic qualifying meet. It wasn’t fast enough to advance, but considering his size and lack of focused training, it’s an impressive feat to say the least.

Washington Wizards guard Bradley Beal is expected to miss at least the next two contests with a hamstring injury.
On Sunday, the Atlanta Braves signed veteran reliever Shane Greene to a one-year, $1.5 million deal.
Four-time Super Bowl champion and five-time Pro Bowl selection Rob Gronkowski recently donated $1.2 million toward renovating a local park in the city of Boston. Count this as another major ‘W’ for Gronk.
The FCS National Championship matchup is officially set. On Sunday, May 16, the Sam Houston State Bearkats will take on the South Dakota State Jackrabbits for all the marbles in Frisco, Texas. Kick-off is set for 1 p.m. CT on ABC.

Not suspended for 11 games: pic.twitter.com/eEdT…

It’s been 1-year since we aired live on 94.7 FM. From all of us at The REF, THANK YOU for your incredible support and making the switch to The Home of Sooner Fans. We have an exciting announcement on this special day! pic.twitter.com/qphX…