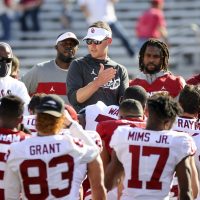 Oklahoma has removed Seth McGowan and Trejan Bridges from its roster.Lincoln Riley: “They’re not members of our program anymore. We wish them the very best going forward.”— Jason Kersey (@jasonkersey) May 6, 2021

After a story from the night of April 15 that detailed an alleged armed robbery involving Bridges and McGowan circulated both local and national news outlets, the pair of OU student-athletes were subsequently suspended while the investigative process played itself out. Three weeks later, it appears that Riley has received enough information to reach this decision.
Just before the 2019 Peach Bowl semifinal, Bridges was one of three Sooners who were stricken with a multi-game suspension from the NCAA after failing a drug test. He was not ruled eligible to return until the 2020 Big 12 Championship Game, which ultimately cost him a total of 10 games.
After a breakout true freshman season that showed a wealth of promise on the field, McGowan entered the NCAA Transfer Portal on April 29, two weeks after his alleged involvement in this headlining story.
Of course, this is a highly sensitive and extremely unfortunate situation for all parties involved. As far as the current team is concerned, like always, it’s next man up going forward.
Now for today’s Hot Links! Oklahoma’s WR room sees more shifting, Rattler reigns with highest Heisman odds, John Means is nearly perfect in solo no-no and more!
OU Links
On Thursday, Lincoln Riley announced that redshirt senior WR Colt Atkinson has been placed on scholarship. The former walk-on pass-catcher began his collegiate career at Trinity Valley CC in Athens, Texas before transferring to Oklahoma in 2019.

In other Sooner receiver news, former Marshall transfer wideout Obi Obialo has reportedly retired from playing football after making just two appearances in 2020 while battling a string of injuries. OU Insider’s Parker Thune has more.
According to FanDuel Sportsbook, third-year QB Spencer Rattler currently has the nation’s greatest odds to win the 2021 Heisman Trophy, followed by Georgia Bulldogs QB JT Daniels and Clemson Tigers QB D.J. Uiagalelei.
Athlon Sports’ Nicholas Ian Allen recently named his top 25 pro prospects from the Big 12 Conference that could declare for the 2022 NFL Draft, and six Sooners made the cut with an even split between offense and defense.
On Wednesday, OU’s Jocelyn Alo and Tiare Jennings were each named finalists for USA Softball’s Collegiate Player of the Year Award. Boomer!

Sooner Nation, give it up for men’s basketball forward Read Streller, who after graduating from OU this spring with a 4.0 GPA in Chemical Biosciences will be attending the School of Medicine at Johns Hopkins University! Congratulations, Read! That’s big time!

Respect his decision Congratulations to @read_streller, who will graduate this month with a 4.0 GPA in Chemical Biosciences, scored in the 100th percentile on his MCAT exam and will attend The Johns Hopkins University School of Medicine in the fall! pic.twitter.com/wIzReiclYI— Oklahoma Basketball (@OU_MBBall) May 5, 2021

Around the Sports World

After one season in Baton Rouge, LSU Tigers rising sophomore QB TJ Finley has announced his decision to enter the NCAA Transfer Portal.
In a 6-0 win over the Seattle Mariners, Baltimore Orioles pitcher John Means faced the minimum 27 batters and tossed an historic solo no-hitter. In fact, he was one wild pitch away from a perfect game. Nonetheless, that’s an impressive feat.
On Thursday, the Detroit Lions signed center Frank Ragnow to a four-year, $13.5 million per year contract extension that effectively makes him the highest paid player at his position in the NFL.
The NBA has reportedly fined Brooklyn Nets guard Kyrie Irving $35K for his repeated refusal to address the media during mandatory postgame availability meetings. That dude wants to be Marshawn Lynch so badly.

Texas A&M Aggies head coach Jimbo Fisher recently took a playful jab at Nick Saban and the Alabama Crimson Tide during an appearance at the Houston Touchdown Club, saying his team will ‘beat (Saban’s) ass’ while he’s in Tuscaloosa. Uh oh. Pencil ‘Bama in for a 60 point win this fall. At least they got a good laugh out of it though.

From Westmoore to the Sooners
Hot Links: Bedlam softball in Stillwater

It’s GOAT Day (2/3/23) Who do you consider the all-time GOAT in college football history? pic.twitter.com/vklX…

OU baseball assistant coach Reggie Willits shared some powerful thoughts on what the coaches constantly emphasis to their team on The @PlankShow. “You’ve got the University of Oklahoma on your chest. When you put that jersey on that’s your Superman cape.” @OU_Baseball pic.twitter.com/qLzp…