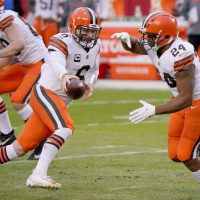 Baker will face the Chiefs — who feature a number of Sooners — on opening weekend. Happy Hump Day, friends and fans!
Former Oklahoma Sooners Heisman Trophy winner Baker Mayfield and his Cleveland Browns will open the 2021 NFL season on the road against the Kansas City Chiefs in a rematch of last season’s AFC Divisional Round playoff game.
This particular contest should be of special intrigue for OU fans because it will involve several former Crimson & Cream stars such as OT Orlando Brown Jr., TE Blake Bell, LS James Winchester and newly drafted rookie center Creed Humphrey for KC. For Cleveland, you of course will see the aforementioned Mayfield featured in this headlining QB duel versus former NFL MVP Patrick Mahomes.

Games like these are great for the health and future of Oklahoma’s program because the more exposure that Sooners have in the pros, the more evidence Lincoln Riley and his coaching staff can use on the recruiting trail. Plus, at the end of the day, one of these teams will be walking away victorious (barring a tie), which is always nice. Stay tuned tonight at 7 p.m. CT for the full 2021 schedule release on NFL Network.
Oh, and there’s also a big OU-centric game taking place Oct. 17.

Now onto today’s Hot Links! OU Softball’s ‘G’ gets drafted, Sterling Shepard is getting back to his roots, a top hoops recruit is taking the road less traveled and more!
OU Links
After originally signing with the Arkansas Razorbacks, highly rated JUCO prospect Akol Mawein out of Sydney, Australia has officially made the switch and is now joining Porter Moser in his first season at Oklahoma. Sooner Scoop’s Bob Przybylo has more details. Welcome to Norman, Akol!

On Wednesday, Patty Gasso and her OU softball team received several Big 12 Conference Awards, including Coach of the Year, five All-Big 12 First Team selections, Player of the Year and more!

CBS Sports’ Ben Kercheval recently wrote about Spencer Rattler and the opportunity he has to become the face of college football entering his second season as Oklahoma’s starting quarterback.
Speaking of Rattler, Pro Football Focus recently rated him as the top QB returning to college football in 2021. I have to agree with them on this one.

Also from the folks at PFF, when looking at the top returning edge rushers in the college game, Oklahoma’s Nik Bonitto stands above the rest. Personally, I believe he could be in for a monster year and high draft pick if everything falls into place.

BOOMER SOONER! The next invitation of the 2021 College Draft goes to @ggotgame45, pitcher from @OU_Softball. : @OU_Athletics pic.twitter.com/ODr2yS6qXp— Athletes Unlimited (@AUProSports) May 11, 2021

In other softball news, the 42-2 Sooners remain atop the NFCA Coaches Poll after clinching the Big 12 regular season title.

After rocking No. 87 for his first five years with the New York Giants, former Oklahoma standout WR Sterling Shepard will return to his collegiate No. 3 beginning this fall. Excellent.

Around the Sports World
The upcoming NFL season kicks off on Thursday, Sept. 9, as Tom Brady and his reigning Super Bowl winning Tampa Bay Buccaneers host the return of Dak Prescott and the Dallas Cowboys. The full 2021 schedule will be released in full tonight at 7 p.m. CT on the NFL Network.

2021 five-star forward Patrick Baldwin Jr. has signed with mid-major hoops program Wisconsin-Milwaukee, effectively going against the grain over offers from college basketball powers like the Duke Blue Devils and the Georgetown Hoyas. The nation’s fourth-highest rated prospect will be playing for his father, Pat Baldwin, who is entering his fifth season with the Panthers.

On Tuesday, former Notre Dame Fighting Irish WR Jordan Johnson announced his decision to transfer to Orlando to join the UCF Knights.
After three seasons, the New York Rangers have fired head coach David Quinn along with three assistants. Under Quinn, the team went a combined 96-87-25 with only one playoff appearance that resulted in a qualifying round loss.
The MLB has instructed the Oakland Athletics to explore relocation options amid current issues and disadvantages with RingCentral Coliseum.

Is new OU commit and No. 2 RB Gavin Sawchuk still going to take his Notre Dame visit? He gave the full update on his recruiting situation just now with @jhale24 @247Sports pic.twitter.com/EeNR…

The @247Sports No. 2 RB in the 2022 class, Gavin Sawchuk, is live with @jhale24 discussing his decision to commit to the #Sooners. Listen: streamdb5web.securen… pic.twitter.com/D9SD…