By Perry Spencer on May 10, 2018 in Community Articles

On any given day at Cobblestone Creek Golf Club, soccer balls soar through the air. At first glance, this may seem unconventional, but it’s actually a combination of the popular sports of golf and soccer, known as FootGolf.

“Basically, it’s soccer that’s played on a golf course,” explained Tim Shannon, owner of Cobblestone Creek Golf Club. “Or, it’s golf played with a soccer ball, depending on how you look at it.” 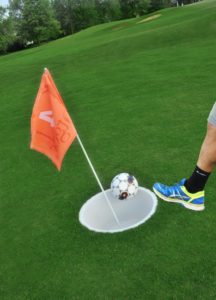 FootGolf, which follows standard golf rules, is played with a regulation No. 5 soccer ball using 21-inch holes. The user-friendly sport requires no previous experience and is great for all ages.

It’s also an affordable entertainment selection, Shannon said. On weekdays, the cost for a nine-hole round of FootGolf is $8, and on weekends it’s $10. People can play a second round for $6 each and rent a soccer ball for $2 if they don’t want to bring their own.

While the exact origins of the sport are unknown, the first nine-hole FootGolf tournament played on a golf course was held in 2008 in the Netherlands by a group of Dutch and Belgian professional soccer players, Shannon said.

From there, it grew in popularity, eventually making its way to the United States when the American FootGolf League (AFGL) was founded in 2011. Now, people can play the sport at more than 500 courses in the United States. Cobblestone Creek joined the AFGL in April 2015.

College kids and families are frequent players of the sport, and Shannon said you will often see grandparents who live in the Cobblestone Creek neighborhood bringing their grandkids to play when they’re in town for a visit.

The course also hosts birthday parties and corporate events where FootGolf can be an element of the action. Local youth soccer teams and other groups often come to the course.

“It’s a good team building thing that doesn’t require any expensive equipment,” Shannon said. “It’s inexpensive to play, and it’s a couple hours of entertainment and a way to exercise.”

One team that utilizes Cobblestone Creek for FootGolf is the Norman North High School boys’ soccer team, coached by Geo Claros. Claros said the sport gives his players an opportunity to relax while still working on soccer skills.

“It’s an opportunity for us to go out and kind of tweak what we do in soccer, adding a dimension of golf,” Claros said. “It’s a way to break up our regular practice routine and still be competitive against each other.”

The players love it.

“When we get into a big grind in the middle of our season, for us to get out there and do something a little bit different, where it’s very relaxed, is always a blast for them,” Claros said.

As FootGolf has grown in popularity, it also provided a revenue stream in a time when golf courses were struggling, experiencing declining interest from young golfers, Shannon said. In fact, FootGolf now makes up about 20 percent of the revenue for Cobblestone Creek Golf Club as it has become a popular source of entertainment in Norman.

“It just gets the whole family out,” Shannon said. “On Sundays in particular, we’ll see dads have their golf clubs, but the younger kids will have their soccer ball with them. Dad can still play golf, but the kids can kick the soccer ball around, so everyone’s out there. What’s nice is occasionally the son or daughter will ask to putt, so it gets them interested in playing golf too.”– BSM