LeBron James is in Oklahoma City with his retooled Cleveland Cavaliers (33-22) to battle the Oklahoma City Thunder (32-25) tonight at 7 p.m. on TNT inside Chesapeake Energy Arena. The Cavs star was asked during shoot around about Oklahoma phenom freshman Trae Young’s impending decision on the NBA Draft.

James’ response to OKC’s Fox 25’s Myron Patton was both comedic and yet revealing.

LeBron James says there’s no decision when it comes to #Sooners PG Trae Young going pro at the end of this season. “He better go pro.” pic.twitter.com/lfRvwGA81L

The three-time NBA champion and four-time NBA MVP responded by saying, “What decision? That ain’t no decision. That’s like saying am I waking up this morning, brushing my teeth? He better go pro.”

Then, LeBron served up this media gold when asked what the biggest adjustment will be for Young if he decides to go pro. 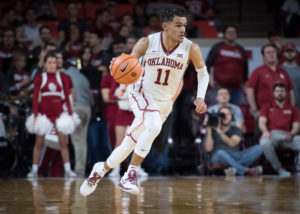 “How much money he going to spend monthly, how much he going to save. That’s the only adjustment he got to worry about,” James said.

James has been outspoken about Young in the past, calling him a “special player” back in January. LeBron is familiar with Trae from time spent at James’ camps.

3 years ago today: Tre Brown saved the day in the Big 12 Championship Game. @T_Brown25 chased down Chris Platt to save a TD. Baylor settled for a FG and OU won in overtime. Brown’s effort kept OU from having to rally in the final minutes. 🫡 pic.twitter.com/3zie…

Grant Sherfield was the story last night, as 22 of his 24 points came in the second half. However it was his defense that Porter Moser was impressed with the most. @gsherfield5 pic.twitter.com/1ULo…

There’s a Superman in the College Football Hall of Fame! twitter.com/roywilli…