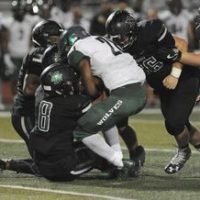 One the face of it, yeah, just like that.

Instead, at Harve Collins Field, the Millers claimed a 38-31 victory.

Comeuppance can’t be served up more

Winning another title isn’t on the minds of OU softball, according to @grace_lyons5: “That’s not our ultimate goal, to win another. Ultimately we want to be the best we can be, the best team that maybe OU has ever had and I think that’s our main mentality going into the season.” pic.twitter.com/GWTa…

22 years ago today: Tommie Harris signed with OU. A 5-star DT, Harris was ranked as a Top 10 player nationally and the No. 1 player in Texas. A day one starter at OU, Harris finished his career as a 2-time All American and Lombardi Award winner. @Tommieharris90 pic.twitter.com/9RVs…