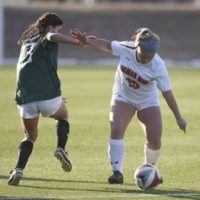 The Norman High girls had just played 80 minutes of soccer against Norman North.

Though nine second-half shots from the Timberwolves (2-2) made the game appear statistically much closer, it wasn’t like Tiger keeper Mackie Abbey was tremendously busy, nor did she have to make any difficult saves.

Indeed, it appeared the Tigers (4-0) had earned their 2-0 victory because, you know, they were the