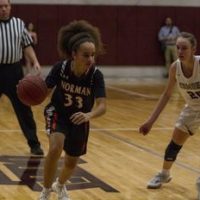 EDMOND — Michael Neal looked out on the floor and saw a state tournament team.

For now, it’s just not his own.

Fourth-ranked Edmond Memorial never sweated an early deficit and put a vice grip on its late lead in a 51-40 victory over No. 8 Norman High in Monday’s girls basketball regional finals at Memorial.

Disappointed as Neal was that his team dropped

14 years ago today: OU set an NCAA record as the first team to score 60-plus points in five-consecutive games. The No. 2 Sooners set the record with a 62-21 beatdown over Missouri in the Big 12 Championship Game from Kansas City. pic.twitter.com/G5yA…

OU women’s gymnastics has won 5 of the last 8 national titles. So how is head coach KJ Kindler keeping her program hungry? @PlankShow asked her on today’s show. “Unless your hands are full, you don’t have enough.” - Kindler on winning more rings. @OU_WGymnastics pic.twitter.com/PyGW…

Portal wish list: OU fans, who’s the one player you hope the Sooners land in the transfer portal? pic.twitter.com/CNAl…