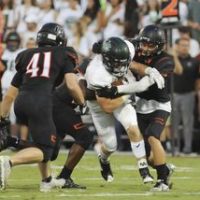 In a sense, the Tigers had. Nobody expected them to compete with No. 3 Norman North, much less take the game down to the wire. The series’ last two games were out of hand by halftime. Instead, NHS trotted off Owen Field feeling