By Perry Spencer on April 25, 2018 in Community Articles

Japanese Breakfast is the solo music project of Michelle Zauner of Oregon-based Little Big League. Traveling to Norman just days after they are scheduled to play at the famous California desert music festival, Coachella, the band is expected to draw a crowd so large it warrants an outdoor stage on Thursday night – a first in Norman Music Festival history.

“This band is just so lovely and experimental and a little bit odd and ethereal and I like them,” said Shari Jackson, Norman Music Festival’s executive director. “They are touring and now we get to have them, too. They’re getting really big so we’re going to have to make some big space.” 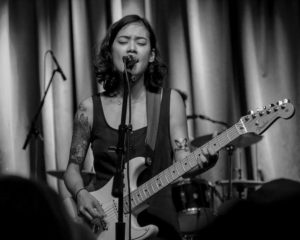 In the past, Thursday night bands have performed at Sooner Theater.

“Sooner Theater is a beautiful, historic venue,” she said. “But we didn’t want to lock anyone out of seeing them and also didn’t want to overwhelm that space or its staff. We’ll still be booking all of our indoor venues as usual.”

The Norman Music Festival is one of the largest free independent music festivals in the country.

“The major draw is that it’s free,” said Beau Jennings, a musical artist scheduled to perform at the festival. “I’m proud of the organizers for keeping that as a priority. I think it has benefitted the community.”

National touring acts are feathered with local artists, offering great exposure to up-and-coming bands. More than 600 bands apply for the stages during an open call, but only around 300 spots are available. 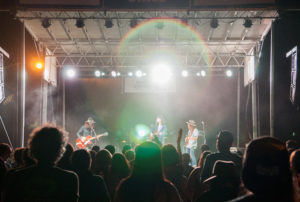 “It’s a big job,” Jackson said. “We fortunately have a very talented team of people who are very in tune with the independent music scene.”

She said they pull from some of the best in independent music around the country, but still strive to keep the festival rooted in Oklahoma music.

“Oklahoma has an expansive music scene from all genres,” Jackson said. “We love to be able to showcase that here.”

The festival began in 2008. Back then, it was a one-day, one-stage event. It has since grown to a three-day festival. More than 100,000 people are expected to fill the streets this year.

“The first year we didn’t have a clue what we were doing,” said Kent Johnson, president of the Norman Music Festival’s board of directors. “But it turned out fantastic and has continued to grow from there. We continue adding indoor venues and everyone in the community wants to be involved.” 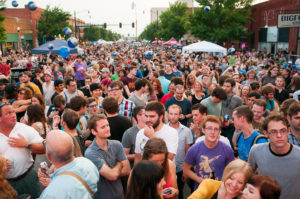 The festival is sponsored by the City of Norman, Oklahoma arts councils, the Kirkpatrick Foundation and various other donor gifts ranging from $500 to $20,000.

“It’s a true community effort,” he said. “We’re going to try to highlight how much the community welcomes this festival to honor all those who pitch in to help make it happen.”

In addition to live music, the family-friendly festival boasts art and food vendors, beer gardens, a kid’s area with bouncy houses and the Lion’s Club hosts a carnival nearby. It takes 15 board members who work year-round and more than 200 volunteers to keep the festival afloat. Anyone interested in volunteering can sign up at normanmusicfestival.com to work a shift and receive a free T-shirt. 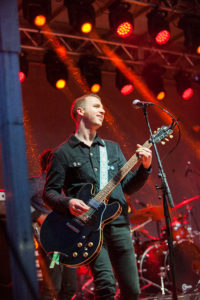 “We’re committed to keeping it as a free and not a ticketed event,” Jackson said. “We like to think of ourselves as the little festival that could. We’re slowly navigating the leap to national sponsors but doing it in a way to keep our local businesses at the forefront.”

As a way to give back to the community, venders are partnering with a local nonprofit and will donate a portion of this year’s beer and merchandise sales. The nonprofit will be able to pass out information and educate the public about their cause.

Part of last year’s event was almost rained out, but they expect to make up for it this year.

“We didn’t have the successful festival we were hoping for in 2017,” she said. “So, we’re trying to be frugal with this year’s budget, but still put on the same high-level festival. Somehow, we’ve managed to stay within budget and present the best lineup of music we’ve had in 11 years.”

Festival goers can find the schedule online at normanmusicfestival.com.

“It’s a great spring time activity I look forward to each year, kind of the start of outdoor festival season,” Jennings said. “I plan to be there until they won’t have me anymore.”– BSM