By Josh Helmer on July 9, 2018 in Community Articles

If you follow football at all, chances are you’ve heard of the Selmons. The family’s impressive history with both Sooner football and the NFL is enough to make any outsider think that the Selmons probably live and breathe sports.

All it takes is a few minutes of talking with University of Oklahoma Senior Athletics Director Zac Selmon to see that the real legacy of his family is built on the impact that they’ve made off the field.

Selmon credits his parents for instilling in him and his sisters the importance of servant leadership. A year before he was born, his mother, Kathryn, started the nonprofit Food and Shelter for Friends. The Selmons had just moved back to Oklahoma and Kathryn was struck by the number of people in need around their neighborhood. Without a second thought, she started organizing the fundraiser that launched Food and Shelter for Friends. The organization, now simply called Food and Shelter, has served the Norman community for more than 30 years. 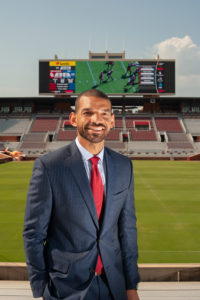 Selmon’s dad, Dewey, and his two uncles, Lucious and Lee Roy, were defensive linemen for the Sooners in the 1970s before going to play professional football. His dad and uncles left a trail of athletic excellence wherever they went, but Selmon says that they were never as concerned with helping him improve athletically as they were with helping him grow up to be a good person.

“Of course, we love sports,” says Selmon, “but I think what defines our family is the impact that we make on others, the time we spend with each other, and the love that we have for each other.”

Selmon, however, is quick to admit that sports have been a part of his life for as long as he can remember. Growing up, he looked up to his older sisters, Shannon and Lauren, who were avid basketball players. Selmon remembers recognizing not only their athletic achievements, but also the impact that sports had on their lives.

“I wanted to be like my sisters. I saw how much they grew while playing basketball,” he says. “Team sports can teach so many life lessons, whether it’s about respect, working together, learning from failure or overcoming challenges. I was really drawn to that aspect of sports from an early age.”

Selmon proudly displays his uncle Lee Roy’s football jersey on one of the walls of his office. After playing football for OU, Lee Roy Selmon was the first pick in the 1976 NFL draft, to the Tampa Bay Buccaneers.

“Lee Roy was a huge reason why I got into college athletics. Seeing how he carried himself every day was very inspiring. He taught me so many valuable life lessons. I put his jersey in my office, so it could remind me every day of why I’m in the business.”

After playing basketball and football at Norman High School, Selmon moved to Winston-Salem, North Carolina to be a part of Wake Forest University’s Demon Deacons football team. He graduated with a degree in religion and international studies in 2007. After he came back to Oklahoma, Selmon started working with the Sooner athletics program while getting his master’s degree in education from OU. 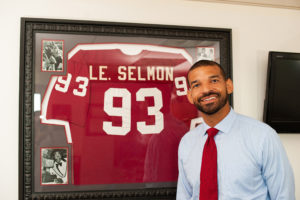 “It’s really fun for me to come to work at the university, knowing what everybody has put into this program — not only my family, but all of the great players that came through here.”

In Selmon’s current position as senior athletics director for administration and development, he’s part of the strategic planning for the university. He also oversees fundraising efforts and heads up the college’s cross country and track programs.

“As a university, we’re in a position to lead the NCAA on a national level,” he says. “We’re able to have great dialogue and generate the resources to give our kids some great opportunities.”

One of Selmon’s main focuses outside of work is the Shine Foundation, a nonprofit organization that he co-founded with his sister, Shannon. The idea for the Shine Foundation started when Selmon’s older sister, Lauren, went on a humanitarian trip to Liberia, West Africa. At that time, Liberia had just been through a civil war.

During her time there, Lauren did some work at an orphanage called Rainbow Town, where one woman was doing her best to care for more than a hundred kids that had been orphaned during the war. When it came time to leave, Lauren had bonded with one of the children so much that her parents agreed to adopt the child, sight unseen.

Selmon soon followed in his sister’s footsteps, first visiting Liberia when he was still a student at Wake Forest.

“The first time I went there, I was struck by seeing a country that had been through a horrific civil war, but through that you could see the beauty of the country and the strength and beauty of the people.”

When a reporter wrote a story about the Selmon family for The Oklahoman, people started sending in checks to help the children of Rainbow Town. With that money, Selmon and Shannon started the Shine Foundation. The organization has many active projects in Liberia, including medical missions, adult literacy programs and sending financial support to the orphanage.

To learn more about the Shine Foundation and get involved, visit shinefoundation.org.
Selmon lives in Norman with his wife, Rachel, and two daughters — Shayne, 7, and Rylee (who goes by “Meatball”) 3. Shayne is already following in her grandmother’s philanthropic footsteps.

After her grandma taught her how to make soap as a fun craft, Shayne quickly saw the potential to use her creativity to help others. She started Shayne’s Hope with a dream of “washing away” homelessness, child hunger and sickness. Her goal is to give away $100,000 by the time she graduates from elementary school and she’s already well on her way.
Selmon couldn’t be prouder.

“Throughout all of our journeys, it’s all about spending time with the people that you love and figuring out how you can make a positive impact on other people.”– BSM