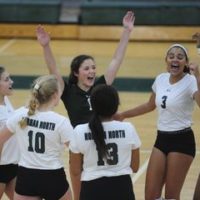 Norman North is going back to the Class 6A state volleyball tournament for a fourth straight season.

Of course, that’s no surprise.

A top-three team just about the entire season, second-ranked in the final regular-season coaches’ poll, the Timberwolves have had their eye on the Class 6A state championship — a crown they came one victory from claiming a year ago — for