By Perry Spencer on May 16, 2018 in Community Articles

With more than 55,000 miles of shoreline and 1,400 square miles of lakes and ponds, fishing is a popular way to spend an afternoon in Oklahoma. But, for some in this state, fishing is more than just a weekend hobby.

The members of the University of Oklahoma Fishing Club spend their weekends practicing for and competing in state and national tournaments. 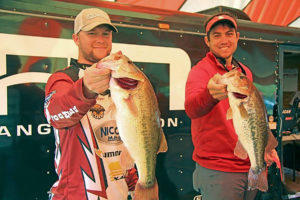 “We aren’t just a group of guys who just hang out, fishing every weekend, having fun. There are three main circuits we participate in on a national level,” Charles Vang said, sponsorship officer with the club. “We travel across the country for those, and we also compete in the Okie Series against colleges in Oklahoma.”

Since 2006, when the student organization got its official start, OU Fishing has reeled in back-to-back wins at the Bassmaster College Classic in 2013 and 2014, and a top 20 finish in the Fishing League Worldwide (FLW) 2016 National Tournament. 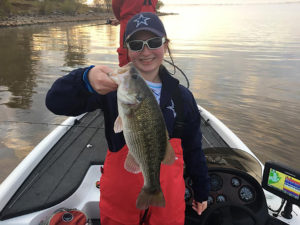 This May, the club will also compete in the BASS Eastern & Western Regionals, ACA Collegiate Championship and BASS Collegiate State Qualifier.

While tournaments do offer cash prizes, Vang said it is about more than just a win.

“College fishing has created so many new professional anglers,” Vang shared. “The sport has opened up many opportunities, even outside of competitive fishing; engineers to design fish finders, marine biologists, fresh minds in the industry. These tournaments are a good opportunity to learn and network.”

Since the only requirement to join is being a full-time student at OU, the club is made up of a diverse group of students, men and women from freshman all the way up to graduate students.

“When I came to the club in 2015, there were only eight of us,” Vang said. “We have grown substantially with a little over 30 in our group.” 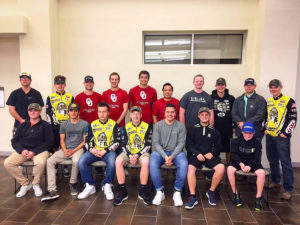 Just as the club has been a catalyst for its own members, OU Fishing is also using its collective impact to cultivate a new generation of fishermen, competitive and recreational.

“High school fishing has been growing as well,” Vang said. “Almost every high school has a fishing club and we want to help those kids prepare for college.”

They also have a Hooked on Fishing, Not on Drugs program that aims to teach kids how to cast, tie knots and more while sharing about the importance of education. Their newest program, called Cast for Kids, takes children with disabilities fishing for a day.

“We take kids out to fish at Lake Thunderbird, some that have never been fishing before,” Vang said.  “It is a really fun experience.”

Fishing at the competitive level is an expensive sport. When you add in travel expenses like gas and lodging onto boat maintenance and tournament supplies, it all adds up.

“Our club is mostly self-funded through members, sponsors and fundraising,” Vang said. “The university puts on a 1,000 Strong campaign to help with expenses each year. We have a square website where we sell shirts and stickers to help out as well.”

For more information about OU Fishing, visit their Facebook page, @OUFishingClub or their shop at squareup.com/store/ou-fishing-club. – BSM