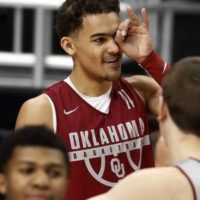 PITTSBURGH, Pa — Once again, Trae Young has a decision to make.

Two years ago, he flirted with the idea of transferring to a prep school for his senior year of high school. Less than a year later, he chose Oklahoma over Kansas as his college destination in Norman North’s crowded auditorium, and after ending his freshman campaign with a loss Thursday, the NBA