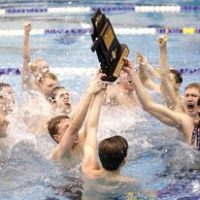 Nate McMillen dried his shoulders with a towel and was standing on the damp mosaic tile when a teammate approached him.

“It’s over,” his friend acknowledged.