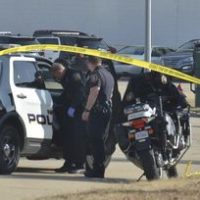 NORMAN — Norman police released more information about the active shooter incident at Bergey Windpower Co. that happened Wednesday afternoon, including the name of the shooter and the woman who was injured.

According to the Norman Police Department release, police responded to an active shooter call Wednesday afternoon at 2200 Industrial Blvd. and located a suspect, identified as William Ray Adams, 55. Adams had a

Sooner fans, what’s your early thoughts about the matchup against Florida State in the Cheez-It Bowl? pic.twitter.com/29zJ…

Sooners in 60: Reports say it’s OU and Florida State in the Cheez-It Bowl. @Tyler_McComas thinks FSU is pretty good, but says that presents a great opportunity for OU. @norman_air pic.twitter.com/yWjZ…

Guys that played at an elite level today: pic.twitter.com/aZbI…

Sooners in 60: Less than one hour until tip-off for OU men’s hoops at Villanova. Can the Sooners make it 7-straight? @TRowOU gives a quick breakdown with a special guest! @norman_air pic.twitter.com/ikYB…

6 years ago today: @samajp32 took a knee to secure Bedlam and a Big 12 Title When asked why he didn’t score, Perine said: "I mean, what's the point of scoring? We're already up by two touchdowns. There's only a few seconds left, so there's no need to run up the score.” pic.twitter.com/FEPU…