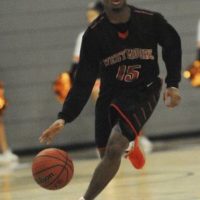 There’s nothing better than starting the season against a rival.

Westmoore hosts Southmoore Tuesday, in a renewal of a fierce rivalry that has been one-sided lately. The No. 4 Westmoore boys start the season as a favorite to contend for the state title. Returning nearly every player from last year’s team, which made it to the state tournament for the first time since

Chalk Talk: Is OSU Becoming What Baylor Was?
Norman North trying to prove it can “win without Trae”