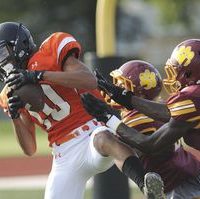 There isn’t a battle in Norman High’s backfield.

Running back Traevon Edmundson is still the top guy, even though he was held out the first three series in the loss to Jenks last week. Coach Rocky Martin said the decision to start Exavier Smith was due to “some things in house” but that Edmundson will return to the starting role this week against

It’s GOAT Day (2/3/23) Who do you consider the all-time GOAT in college football history? pic.twitter.com/vklX…

OU baseball assistant coach Reggie Willits shared some powerful thoughts on what the coaches constantly emphasis to their team on The @PlankShow. “You’ve got the University of Oklahoma on your chest. When you put that jersey on that’s your Superman cape.” @OU_Baseball pic.twitter.com/qLzp…