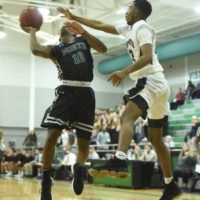 Topping the noise Norman North’s Special Olympic basketball teams drew from the crowd during Friday’s halftime was going to be tough to beat.

Both players produced thunderous dunks that energized the building in No. 3-ranked North’s 54-43 win over No. 12 Edmond Memorial at the North gym.

Smith’s came in the first half, shortly before North’s

3 years ago today: Tre Brown saved the day in the Big 12 Championship Game. @T_Brown25 chased down Chris Platt to save a TD. Baylor settled for a FG and OU won in overtime. Brown’s effort kept OU from having to rally in the final minutes. 🫡 pic.twitter.com/3zie…

Grant Sherfield was the story last night, as 22 of his 24 points came in the second half. However it was his defense that Porter Moser was impressed with the most. @gsherfield5 pic.twitter.com/1ULo…

There’s a Superman in the College Football Hall of Fame! twitter.com/roywilli…