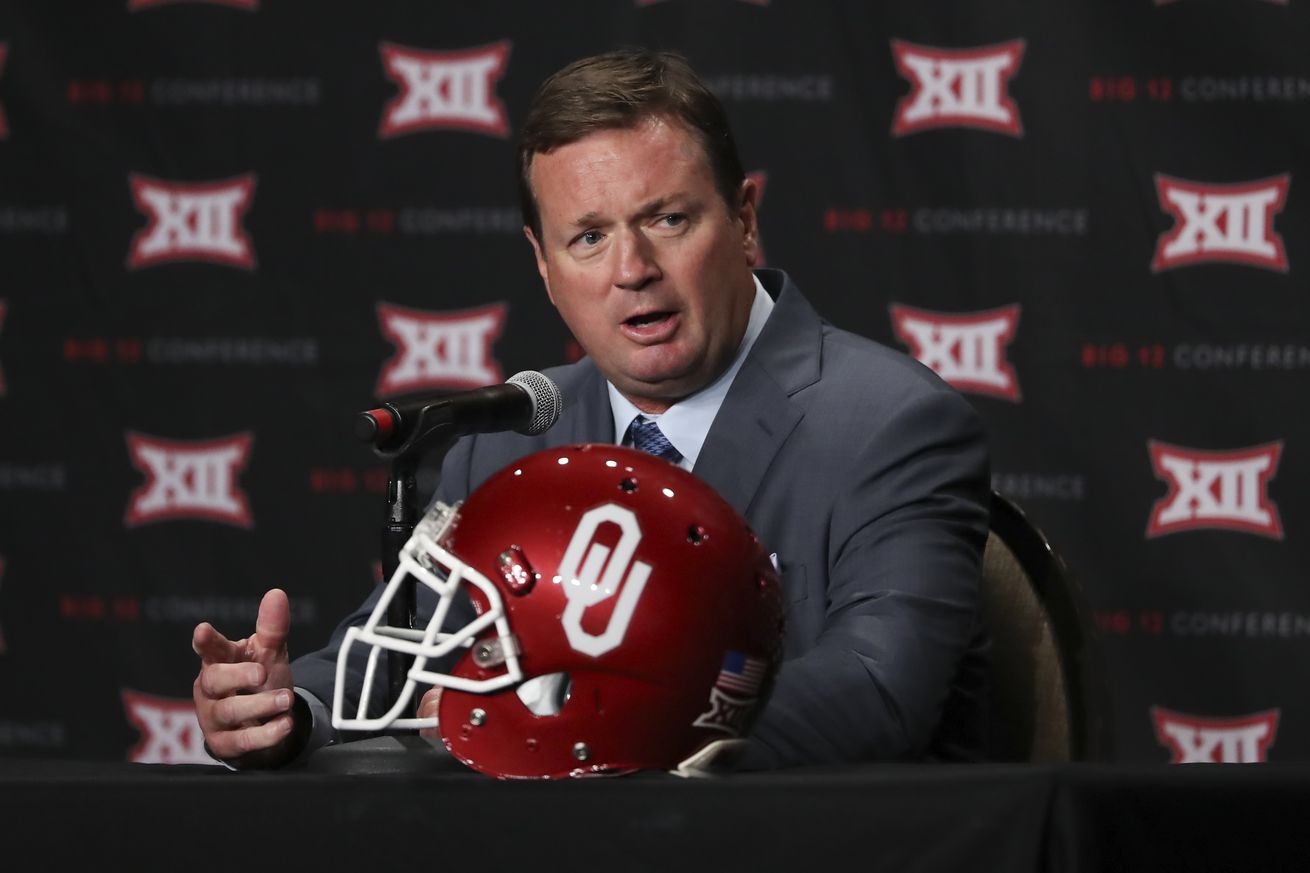 Where do the Four Bs rank? Where’s Patty Gasso?

I put together a top-10 list of who I believe are the best OU coaches of all time. If you disagree, you know where to find me on Twitter, YouTube and the comments section below.

Coale took the job at OU with zero collegiate head-coaching experience in 1996. In 2006, she led the Sooners to just the second-ever undefeated season in Big 12 conference play history—in men’s or women’s basketball. She’s been inducted into the Oklahoma and Women’s Basketball Hall of Fame and outlasted every coach at OU except Patty Gasso.

To have the level of success Riley had in his first year as the head man at OU is nearly unprecedented in the sport. He not only coached his team to a semifinal berth but put a sixth Sooner on the Heisman podium and one of the most prolific offenses in history on the field.

Gibbs is an Oklahoma lifer who only hardcore Sooners fans remember as the kind of coach who grew from a grad assistant in 1975 to earning the head coaching nod following one of the great college football coaches of all time. At Oklahoma, his record was decidedly above average at 44-23 over six years. He never had a 10-win season, but he never had a losing one either. Let me tell you… we missed him dearly when Howard Schnellenberger finished out his first and only season at Oklahoma. He also took over a program in turmoil and did a pretty great job of cleaning up the mess.

At Oklahoma, so much of who we are is built around football. And we would not have tradition to build on if not for Owen. He won 122 games from 1905 to 1926 and had only three losing seasons. The field at Memorial Stadium is named in his honor to commemorate the foundation he laid for OU football.

In 18 years, Williams has won nine national titles including a four-peat in 2015, 2016, 2017 and 2018. He has won more than 93 percent of all meets OU has entered and also served as Team USA’s head coach at the 2016 Olympics in Rio de Janeiro, Brazil. Half of the 2010 Team USA World Championships team had competed for Williams at Oklahoma. In men’s college gymnastics, there’s no one else in the conversation as the best to ever do it.

Tubbs had one abysmal season in 1980-81 where the Sooners finished 9-18. That was his first. From there he put together 12 consecutive 20-win seasons, including three 30-win seasons. In 1987-88, the Sooners finished as the national runner-up with an 83-79 loss to Kansas. Many folks forget that the Tubbs-led squad beat KU out for the Big 8 conference title that season.

He also didn’t mince words when it came to officiating.

There’s a fun conspiracy theory that John Blake was a year away from turning Oklahoma around. But it’s only fun because we know what happened two years after Stoops replaced him as the headman at OU. Sooner linebacker Torrance Marshall showed up to get his boy’s Heisman back. Florida State fans can get this salt, fam.

But it’s the years following OU’s 2000 national title that defined Stoops’ legacy. Yes, in bowl games he was a paltry 9-9. Over 18 years, though, he won 190 games—the school record—and ran roughshod over a Big 12 Conference that ought to be renamed in his honor. Because he owned it.

Switzer was the first man to successfully feed the monster with a national title in 18 years when he led the 1974 Sooners to a national title. In his first season as head coach, OU finished 10-0-1 and earned a No. 3 ranking in the Associated Press poll. From 1973 to 1988, Switzer put together a decade’s worth of 10-win seasons and won three national titles. He’s also the most quotable coach in history.

Name something you’ve done 47 straight times in a row. Anything. Short of getting out of bed, it’s difficult to say. Now think of trying to win 47 straight football games in a row in big-time college football. Between 1953 and 1957 Wilkinson did just that while winning two of the three of OU’s national title in the modern era. He won the first in 1950. It was different era of football, sure. But I feel confident in saying without Wilkinson there might never be a Switzer or a Stoops or a Riley.

Patty Gasso has won more than 1,200 games in 23 seasons. She’s won four national titles and is looking to three-peat at this current moment. She’s coached the best two-way player in softball history (Keilani Ricketts), home run hitter (Lauren Chamberlain) and pitcher (Paige Lowary or Paige Parker? Take your pick. The one you picked just threw it by you anyway) in the sport over the last decade. In a sport where the best teams usually play between 60 and 70 games in a season and don’t need more than their 10 fingers to count their losses in years when they win the national title, she’s recorded 10 seasons of 10 losses or fewer. She’s won nearly 80 percent of all 1,528 games she’s coached and is universally respected as on a short list of the best softball coaches of all time.

OKLAHOMA SOONERS FANS WHO ARE GAMERS

I’ve compiled a list of folks who love Oklahoma Sooners football and gaming on Xbox Live (XBL) and Playstation Network (PSN). I stream Madden, Destiny and Fortnite on Twitch regularly on Xbox and PS4 (soon).

Follow me here: https://www.twitch.tv/iamleveledup You can add me on XBL, PSN and follow me on Twitch at: IamLeveledUp. YouTube videos still drop every day at 6 p.m. CT and live stream on Wednesdays at 6 p.m. on YouTube.

Sooners in 60: @OU_Baseball plays ✌🏼 in Manhattan today against K-State. @TRowOU is on the scene and gives a preview of the series. #Sooners pic.twitter.com/FvHe…

Lincoln Riley sees Spencer Rattler's growth this spring. And the #Sooners' starting QB had thoughts on his play as well. @SpencerRattler: "I don't try to set a roof on what I can do as a player on the field." Credit: @SoonerSportsTV pic.twitter.com/4DaV…

.@OU_WBBall head coach @SoonersCoachJB is live with @jhale24 and @stevermarshall discussing taking over the #Sooners and her impression of Norman so far. Listen: streamdb5web.securen…