By Perry Spencer on April 27, 2018 in Community Articles

You might say Johnnie Keel’s focus is typical for a gifted resource coordinator in the Norman Public Schools.

She has about 145 third, fourth and fifth graders at Norman’s Truman Elementary School, and her students spends about an hour a week with her. She teaches them critical thinking and collaboration, and they cover a variety of topics such as weather, space, DNA, world population growth, sustainability, erosion, nutrition and cooking. 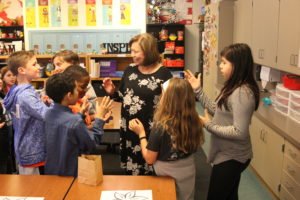 What sets Keel apart from the rest is that all her lessons have an unusual theme for a suburban school district like Norman. She likes to teach her students about agriculture.

As an artist might use paint and a canvas, or clay and a pottery wheel to express their creativity, Keel uses agriculture as the medium for teaching her young students about the world around them. Just as unusual is the fact that Keel is a city girl, born in Durant, but raised in Oklahoma City.

Graduating from Capitol Hill High School, located only minutes from downtown OKC, Keel has never lived on a farm, has never worked on a farm and didn’t even visit grandparents on a farm. She describes herself as a city girl and almost apologizes for the fact that her considerable knowledge of agriculture comes through her years of teaching it, not doing it.

No matter, the 22-year veteran in the classroom is so good at what she does that she has been named the state of Oklahoma’s 2018 Oklahoma Ag in the Classroom Teacher of the Year.

Keel will be officially honored at Ag Day on April 10, during the annual celebration of agriculture at the state Capitol in Oklahoma City. 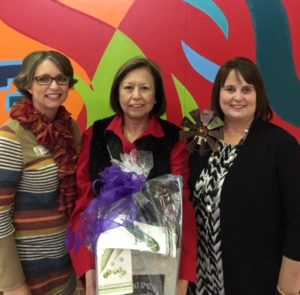 Keel said teaching is a second career that she began in the Moore Public Schools after spending 17 years working as a lease analyst in the oil industry. She had always wanted to be a teacher, but never had an inherent interest in agriculture.

She first became interested in agriculture after enrolling in a teaching workshop and learning about all the free curriculum and supplies that were available in agriculture.

“When you’re a teacher, free and cheap are good,” Keel said.

After 10 years of teaching in Moore, Keel moved to Norman, where she has been teaching for 12 years, and agriculture curriculum has been a mainstay in her classroom almost the entire time.

When students first enter Keel’s gifted and talented program, few of them know much about where their food comes from or the role agriculture plays in producing the clothes they wear or the medicine they take. They think of farming as long days in the field without much pay, she said.

She leads her classes through a broad variety of lessons, and they’re not afraid to get their hands dirty in the process.

They’ve grown tomato plants from seeds that were carried aboard the International Space Station, and they compared them to tomato plants grown from ordinary earthbound seeds. In the end, they didn’t see much difference between the plants, Keel said. But, they did learn a lot about how scientific research is conducted. They saw how important experimental design is when investigating differences in tomato seeds or any other subject of study.

Each fall, she holds an event called Pumpkin Palooza, when she uses pumpkins to teach her students how to estimate weight, measure, count and learn about the decay cycle. In the end, they make pumpkin pie in a bag.

Through their unit on wheat, they learn what a commodity is, and they learn how to make pasta.

“It may not have been the best pasta, but they liked it because they made it,” she said.

They learn where wheat comes from and they learned how different cultures from around the world use it to make various types of bread.

They also learn about Oklahoma and all the agricultural products that are grown within the state, such as wheat, soy beans, sun flowers and hay. Keel said they all discovered this year that cotton is now being grown within the city limits of Norman.

“We are actually fortunate to have so may things that are being grown in Oklahoma,” Keel said. “We feed the world and the students care about those things.”

Keel is one of the Norman school district’s shining stars, said Kristi Gray, the gifted and talented program coordinator for Norman Public Schools.

“She is definitely one of the most passionate teachers that we have,” Gray said. “From a supervisor’s standpoint, she is one of those dream employees. This is who you want in the classroom.”

Keel said she is honored to be named Ag Teach of the Year, but she hesitated, at first, to apply because she didn’t think she was as qualified as other teachers who had grown up on a farm.

“Those people probably know more about animals and the struggles and how ag can change,” Keel said. “I don’t have the experience. I have the passion, but not the experience.”

Ultimately, Keel said she went ahead and applied because she knew she could win a trip to the National Agriculture in the Classroom Conference in Portland, Maine this June. As the winner, Keel will have her expenses paid to attend, and she’s looking forward to seeing a lobster farm and other things that are not common around Oklahoma.  – BSM

Alo, Knighten Homer in 6-0 Win over Texas
Five Player Options That Look Like Locks To Be Exercised