By Perry Spencer on May 8, 2018 in Community Articles

A Multi-Decade Career Propelled by a Passion for Helping People

Like many things in life, Captain Jamie Shattuck’s career with the Norman Police Department has been forged with perseverance and a steadfast focus on his goal to make Norman a safer, better place to live.

Those central ideals that Shattuck entered his career with still carry on with him today. 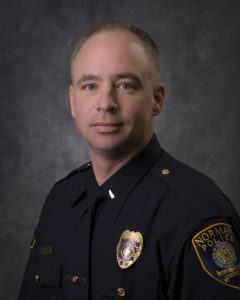 Despite having more than two decades of memories to draw from, he points back to the beginning when he’s asked about his defining moment as a police officer.

“It took me six years and four tries to make it onto the Norman police department,” Shattuck said.

The reminder of the determination he put in all those years ago reminds him not to rest on his laurels.

“I have a deep appreciation, working for the Norman Police Department and getting to make a difference every day,” Shattuck said.

Over his 25 years in law enforcement, Shattuck has worked his way through the ranks as a patrolman, a SWAT member and, for a short time, as a narcotics investigator.  He spent several years working with the Cleveland County Drug Court, which proved to be a pivotal point during his career, one that allowed him to fully utilize his passion for impacting lives.

“Drug court employs a variety of people that work together to get people away from addiction instead of just putting them in jail,” Shattuck said. “My focus now is changing lives and making a long-term impact.”

Shattuck has taken all that he has learned as he rose through the ranks, and he is now shaping the next generation of police officers. In his role as afternoon shift commander, Shattuck spends his days coaching and encouraging his team of officers. 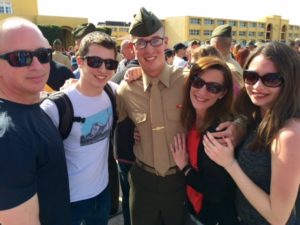 “As a police officer, you have an impact on every person you come in contact with,” Shattuck said. “It is my job to give my officers a climate in which they can go out, do great work and serve the community.”

Shattuck encourages his officers to keep pushing and improving themselves, something he’s done in his own career as well. In 2012, he earned a master’s degree from the University of Oklahoma. His time in the classroom opened the path to yet another journey in his life.

“I enjoyed the classroom setting and kind of missed being in class after I got my degree,” Shattuck said.

Adding yet another hat, Shattuck serves on advisory committees with Food & Shelter and the Salvation Army, providing a law enforcement perspective and a connection to resources.

“I feel that I have taken so much more than I have given,” Shattuck said of his work with these organizations. “It is awesome to watch the impact and how they work.”

“I am a quiet person, but I love people. I recharge my batteries at home with my family.”  – BSM