By Perry Spencer on April 17, 2018 in Community Articles

But something about spending his professional life sitting in front of a computer just didn’t sit right with him. Finally, after years of listening to his best friend from high school rave about his job as a firefighter in Glenpool, Palmer decided to take the leap and try his hand at public service.

When he received the job offer from the Norman Fire Department, Palmer, originally from Bigsby, loaded everything he owned into the back of his truck and made the move without a second thought. 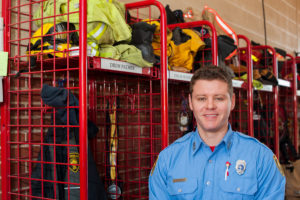 Now, Palmer has been with the Norman Fire Department for more than five years and he couldn’t be happier. He’s thankful for the opportunity to be a helping hand in the community, and he loves the fact that there is no such thing as a “typical day” at work.

“We get calls about pretty much anything and everything you can imagine,” he said. “Anytime that people don’t know what to do, they call 911 and it gets routed to us.”

The fire department sees calls ranging from car accidents to house fires, from unexplained smells to water mains that won’t shut off in the middle of the night. In the fire academy, firefighters receive training in a number of different fields, and they use every bit of that knowledge to tackle the variety of calls that they respond to each day.

“That was probably the biggest surprise to me during my first year working as a firefighter,” said Palmer. “You form your perception of the fire department based on what you see on television and in movies, and once you actually get started it’s surprising to see everything that you get sent out for.”

Right now, Palmer is looking forward to playing in the Heroes on the Court basketball tournament, scheduled for April 22 at the Community Christian School Gym. Everyone is invited to cheer on Norman’s first responders as they battle it out on the basketball court. All proceeds help a local nonprofit, Loveworks Leadership Inc., which offers afterschool leadership programs to middle school students.

The fire department also helps the community by providing fire safety demonstrations for school classes and organizations, and the firefighters are always happy to show visitors around the fire stations.

The nature of the job and the numerous different, and even strange, experiences that Palmer has faced with the rest of his crew, have helped him form a strong bond with his fellow firefighters.

“With the long hours that we spend together and the crazy situations that we find ourselves dealing with around town, we end up forming friendships quickly,” he said. “There are a lot of great people that work for the Norman Fire Department.”  – BSM