By Perry Spencer on February 7, 2018 in Articles

When Skip Johnson took over this year as the new University of Oklahoma baseball coach, he immediately started looking for difference makers. One of his first targets was not only right up the road from Norman, but also a familiar name in the Sooner Nation.

Westmoore standout Braxton Bohrofen recently signed with the OU baseball program, realizing a lifelong dream. In high school, he had been a star on the diamond as well as on the gridiron. 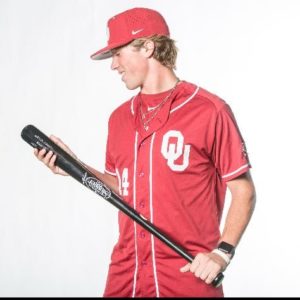 Braxton’s father, Brent, was a four-time letterman on the OU baseball team from 1988-1991. He had 26 career home runs, and his career batting average was .310. Brent Bohrofen said it was enlightening to watch his son get recruited, because the process has changed so much from when he signed with Oklahoma.

Braxton Bohrofen is a four-year player on the Westmoore football and baseball teams. This fall, he served as team captain on the Jaguars’ football team. But, his success goes well beyond athletics. He also is a standout in the classroom, earning a membership in the National Honor Society.

“To be able to follow in my dad’s footsteps is extremely special,” Bohrofen said. “I remember when I was just starting to play baseball, and I chose the number 39 because I wanted to be just like him. I even had his old OU jersey hanging in my room. Now, to see that dream come true means a lot.”

For OU’s new head baseball coach, adding a talent like Bohrofen could be considered somewhat of a dream come true, as well. Maybe even on a level similar to OU quarterback Baker Mayfield, from a passion perspective.

“He’s a quarterback, a leader and a guy who knows how to win,” Johnson said. “He’s physical, and that’s the kind of guys you go after.”

Bohrofen has applied lessons learned as a high school quarterback to the baseball diamond. He threw for 2,300 yards while completing 61 percent of his passes and throwing 25 touchdown passes as a senior. But, he said the leadership lessons learned as a signal caller will be the most important to him as he moves on to collegiate baseball.

“Having played quarterback, it has helped me become more of a vocal leader,” he said. “Playing multiple sports growing up was extremely important to me because each sport has its own set of skills that you have to use, and you can learn a lot by playing more than one sport.”

With his dad as an OU alum, it made sense that Bohrofen would end up a Sooner. But he may not be the last Bohrofen on an OU athletic recruiting list. Braxton’s younger brother, Jace, is not only a stand-out baseball player, but was a back-up to Braxton at quarterback on the Westmoore football team.

For their father, it is special to see both do what they love.

“I have always gotten a lot of enjoyment watching our boys play sports. They have always been a little more competitive against each other,” he said.

Braxton Bohrofen has appreciated the support he has received from his athletic family. He said he can relate to his dad on issues on and off the field, which has helped him mature.

“Coming from an athletic family has been a key factor in my success,” he said. “My parents have always pushed me to be the best growing up, so I’ve always had the mindset to be the best inwhatever I do.”

“One of the most important things, though, is that they can always relate to the situation, whether it be the highest of highs or lowest of lows, they’re always there for me and know the right stuff to say.”

As important as OU has been to the Bohrofen family, doing it in Moore and being a part of the Moore community is equally as special, said Brent Bohrofen.

“There have been a lot of good athletes and a lot of good baseball players out of the Moore area. It is a pretty tight-knit community,” he said. “A lot of my friends’ kids are around the same age, so, getting to watch them all play together and grow up together has been amazing.”

Oklahoma Football Notepad: Basquine will have to make another comeback
Back-to-Back Champs to Open Season in Phoenix