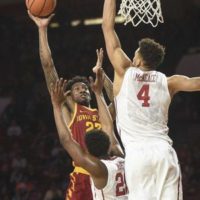 It’s why he used to play up with the bigger kids when he was little and why he returned to Norman North for his senior season despite a mostly inexperienced roster instead of going to a prep school, where he could play alongside other Division I-bound stars.

There’s one challenge, though, Young’s happy

A tongue-in-cheek question was asked yesterday to Brent Venables on the national doubt surrounding him, simply because he’s a first-time head coach. He answered on The Rush with @TedLehman11 and @Tyler_McComas pic.twitter.com/FtTE…

OU ⚾️ stock is ⬆️ 🆙 📈 OU has won 8 of its last 10 Big 12 games, including a 2-0 start in the Big 12 Tournament. @d1baseball’s recent projection has OU as a No. 2 seed in the College Station regional, but don’t count out 1 or 2 more wins being enough for a home regional berth. pic.twitter.com/7gIW…

Another great OU Coaches Caravan stop! Thanks OKC for showing out at The Omni. pic.twitter.com/M1nW…