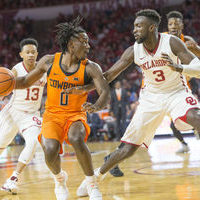 NORMAN, Okla. — Oklahoma played at its pace and used the first few minutes of the second half to build an insurmountable lead in Wednesday’s Bedlam contest.

Oklahoma State attempted to play up-tempo with the nation’s highest-scoring offense. The Cowboys did so for the majority of the game, but ultimately the Sooners’ offense proved too much.

Check out our newest issue of Boyd Street Magazine with @1ericgray on the cover! Available now online -> issuu.com/sportstalk… Or on stands across Norman Thursday. pic.twitter.com/C4gD…

In a very up-and-down regular season for OU, what was the single-best moment from the 2022 season? pic.twitter.com/zote…