Monty Marcum is in the business of growing plants, and as a life-long Oklahoman, you might think he’d have a sunnier outlook when talking about Oklahoma weather.

“Our climate is a terrible climate to grow plants in because of the extremes,” he says. 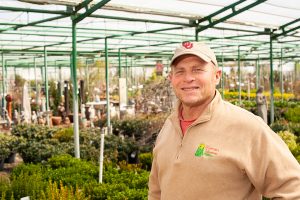 Those are harsh words coming from someone who runs nursery businesses in Norman, south Oklahoma City, Goldsby and Ardmore. But, to Marcum’s credit, it’s the truth.

Situated in the southern plains, the Sooner state seems to be exposed to just about every meteorological whim Mother Nature rolls out. Oklahoma weather changes all the time.

There is extreme heat, and there is extreme cold. Temperature swings are frequent in the winter, moving from frost to thaw more than 50 times a year, and in July, August and September, triple-digit heat is common. A summer without triple digits is a summer to behold.

Meanwhile, rain cycles are inconsistent and prone to drought. And, the wind blows nearly every day. There’s good reason Richard Rogers and Oscar Hammerstein wrote about the wind sweeping down the plains in what is now Oklahoma’s state song. Oklahoma without wind is not Oklahoma.

So, what’s all this mean to the thousands of people who show up at Marcum’s and dozens of other Oklahoma nurseries every Spring? Persevere and stick with what works, said Marcum, owner of Marcum’s Nurseries.

Plants have been growing in this region for millions of years, which proves there’s a spectrum of vegetation tough enough to thrive in Oklahoma’s inhospitable conditions. But Marcum says indigenous plants are not the only path to successful landscaping. There are many plant varieties that are not indigenous, but they have demonstrated an indifference to the mine field of hazards that Oklahomans call weather.

In fact, he said most hollies, junipers, spireas, euonymus shrubs, crape myrtles and ornamental grasses are on his list of nonindigenous varieties that flourish in Oklahoma.

A quick survey of successful landscapes in central Oklahoma will show those plants and others that Marcum considers “sustainable, hard-nosed shrubs that are going to survive.”

He says there are 15 to 20 hardy plants that should make up the spine of any good landscape. After that, gardeners can experiment with plants that are less common to see if they’ll survive and grow.

“That’s when you get to the bells and whistles of the thing,” Marcum said.

Who ever said there’s no adventure in gardening?

Anyone who has strolled through a greenhouse has probably been tempted by the bells and whistles that Marcum’s talking about. They’re the exotic plants that catch the eye and seem perfect for that corner next to the patio.

Just because they’re being sold in Oklahoma doesn’t necessarily mean they work here all the time, however.

Experienced gardeners know better, and novices soon learn about the fringes of landscaping in Oklahoma. Nurseries sell exotic varieties because they work in some landscapes, but not necessarily in all of them. Survival rates are not clear cut or consistent.

That’s why Marcum calls it experimentation. Survival can depend on soil type, drainage, sun exposure, water, care and many other things.

Marcum says most of the customers he talks to have enough adventure in their lives already, so they’re not all that interested in going out on a limb by purchasing an experiment at the nursery.

That’s why he says sustainability is so important. Which brings Marcum back to his list of hard-nosed shrubs.

On the other hand, plain jane isn’t such a bad thing, he says.

“Even if it’s boring, it’s green and it’s pretty. It’s all pretty, and you can do an endless amount of landscaping with those plants, and sustainability is the key. Without sustainability, a landscape is a loser. If it’s not sustainable, your going to lose it.”

In addition to creating new landscapes, Marcum says spring is also a good time to evaluate existing landscaping around the house to determine what plants have outgrown their lifespan. Generally, plants are good for 10 to 15 years. After that, they may become overgrown and potentially destructive.

“A plant in the wrong place is a living liability,” Marcum says. “Watch out for destructive plants and don’t be afraid to take it out and replace it with something new.”

Help is never far away, Marcum said. Nurseries know which plants work best in Oklahoma, and many have landscape experts who are willing to drive out, do a free evaluation and offer advice. Also, smart phones have made it easy for gardeners to photograph and video their yards when they have questions.

So, despite Oklahoma weather and its extremes, Marcum says there is no reason to wave the white flag. Successful landscapes may not always be flashy, but most of the time, they’re pretty.

“Common sense and a practical approach are the keys to success.” – BSM