By Josh Helmer on November 15, 2018 in Community Articles

Meanwhile, Norman North freshman Jada Ryan hopes to join them and in winning a state championship with the girls’ soccer program this spring.

But, the most amazing thing is what these three are doing as individuals. 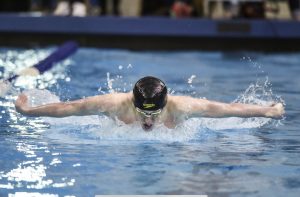 Those three registered as the sixth, seventh and third-best all-time marks ever recorded in the 13-14 age group. His 48.33 seconds in the 100-meter butterfly topped Michael Phelps’ time at the same age.

A junior at North, Tang owns 13 Oklahoma swimming records and his 23.67 seconds in the 50-meter freestyle registered at 97th all-time in the 15-16 age group.

“I’m really honored to have gone on to compete at that high of a level. All of the work that Aiden and I both put in really does pay off,” Tang said.

Hayes credited his relationship with Tang as one of the reasons for his growth and success.

“I’ve had a really great time swimming, to get to go to the level of meets we’ve gotten to and to go to such great venues, but to do it with Jonathan and to have a partner to train with and compete with every day. It’s just a great time,” Hayes said.

The pair met when Tang was 12 and Hayes was 11 and have developed a friendship inside and outside of the pool.

“We became training partners and, from there on, every single day, it’s just been awesome battles at practices. We’re best friends now. It’s just the best ride ever,” Tang said.

In addition to defending their team state championship at North, the pair has Olympic aspirations.

“We have Olympic trials coming up in about a year and a half, so everything I do right now is to further myself, to prepare myself for Olympic trials,” Hayes said. “I want to make Olympic trials and then further my ranking in the United States and hopefully make the Olympic team in 2020.”

In order to reach those lofty goals, they train tirelessly. Hayes and Tang practice 10 to 12 times a week. They also have a great set of coaches helping push them forward. Kent Nicholson is their head coach at Norman North, Hogan Thomas is the pair’s individual coach and Hayes’ father, Ben, is a volunteer assistant at North as well.

Thomas and Ben Hayes swam in high school together at Westmoore and won a state title back in 1995. Thomas raved about Hayes and Tang’s desire to get better.

“The best word to use to describe working with these two is rewarding, to see how far those guys have come along not necessarily with what they’ve accomplished but with what they’ve done on their work ethic,” Thomas said.

Jada Ryan is turning heads too, on the soccer pitch. And, it’s taking her to some pretty amazing places. 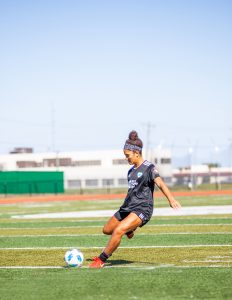 After taking part in the three-day Elite Player Program in June, Ryan was selected as one of the standout performers and invited to spend a week training with the Celtic FC Academy in Glasgow, Scotland, this coming February.

“It’s a great opportunity for me to learn from those coaches and players and get better as a defender and as a person in general,” Ryan said. “I’m also really excited that I get to travel with my mom.”

Ryan will get to see exactly what life is like for those that attend the Celtic FC Academy. She will attend classes with them during the day and take part in training sessions after classes conclude.

Ryan is a versatile player, having played center back, forward and right wing. Lately, though, she’s been playing as a defender and has fallen in love with the position.

“I’ve been playing defender for a while, and I think I prefer defense,” Ryan said. “It’s a harder position, and you get to be stronger on and off the ball.”

But, what does she know about Scotland?

“I don’t know much. I just know that it’s going to be hard to understand their accent,” Ryan said with a smile.

Ryan heard the news that she had been selected for the program from Oklahoma Celtic executive director Don Rother. He broke the news during a meeting with fellow players.

“I thought it was pretty cool,” Rother shared. “It was neat for all of the players to be there to celebrate her. I could tell how excited she was. Everybody gave her a round of applause and cheered for her.”

Rother said he is most excited for the experience.

“It’s something that she’ll get to remember for the rest of her life,” he said. – BSM

Who are you rooting for to win the Oklahoma State-Iowa State game?