A lot has changed in the Sooner football program over the past year, including the addition of Bennie Wylie as the new director of sports performance. In his short time in charge of the strength program, Wylie has made an immediate impact with his energy, passion and charisma.

Wylie was hired in January, but his relationship with University of Oklahoma head coach Lincoln Riley began years earlier, when the OU coach was a student-athlete at Texas Tech.
So, when the call came to join the Sooners, Wylie was ready and excited. 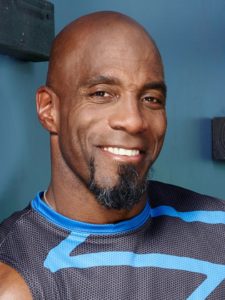 “It has been great watching him. From a 17-year-old athlete out of Muleshoe to this point in his career, I’m proud,” Wylie said. “But it’s not about strength and conditioning with us, it’s about helping young men grow up and get to the next point of their career. For some guys, it’s the NFL, others, it’s coaching, and for some it’s being a fireman.”

Wylie spent seven seasons at Texas Tech in addition to stops in Austin, Knoxville and a stint with the Dallas Cowboys. He replaces Jerry Schmidt, who recently left OU to take a similar post at Texas A&M.

Wylie’s move to Oklahoma has not only reunited him with other familiar names like Bedenbaugh, Simmons and McNeill, but the move also has allowed him to follow in the footsteps of his mentor, long-time OU strength coach Joe Juraszek.

Juraszek gave Wylie his first strength and condition job with the Dallas Cowboys in 1999, training the likes of Emmitt Smith and Troy Aikman.

“I’ve known about the legacy here and what’s expected. Coming in, I’ve seen nothing less than what I expected: great young men who have done it right, who are very respectful and are willing to do anything and everything it takes to be great, and to win at a high-level year to year.”

Wylie has had an immediate impact on the Sooner football program, overhauling strength and conditioning with a focus and detailed hands-on approach, working out alongside the athletes.

His approach is already paying off as he has helped standout wide receiver CeeDee Lamb gain a reported 11 pounds of muscle.

He has also challenged several Sooners to become better leaders both on and off the field as well as inside the weight room.

“You played great last year, but that’s not enough,” Wylie said. “Kenneth (Murray), last year, he was a freshman and played great, but now we need (him) to play great and be vocal. Tre (Norwood) was a young freshman that played awesome, but I need (him) to get stronger and faster. If you’re not willing to pay the price today, you don’t deserve to play in that crucial moment late in the game.”

“That’s why I felt incredible when coach Riley called. It’s all about the trust,” Wylie said. “I’m his extension, his voice in the off season when he can’t be around. I’m all the coaches’ voices. That trust and connection is unique.”

That trust development can be a little more challenging between coach and player. A dedicated family man, Wiley and his wife, Jen, have three children, 12-year old twin boys and a four-year old daughter. In a lot of ways being a strength and conditioning coach can be like being a parent, Wylie said.

“There is tough love, but it’s always love,” Wylie says with a smile. “But there are times when I have to back you down and take care of you. I’m not going to cut any corners. I’m giving you my very best.”

“He’s been a good breath of fresh air for our program,” Riley said. “I’ve been really pleased. I think he brings a great mentality here, which I think is so critical for that position. I couldn’t have hired anybody better.” – BSM