By Perry Spencer on April 13, 2018 in Community Articles

Jake Irvin is the ace of the University of Oklahoma’s pitching staff. The junior from Bloomington, Minn., has been the consistent Friday starter for the Sooners for the last two seasons, setting the tone with hard work and leadership.

We sat down with Irvin to visit about what brought him to Norman, his future in baseball, the Sooners’ new head coach and the 2018 season.

Q. You have a new head coach this year. While Skip Johnson is a familiar face as your pitching coach from last year, how has the team handled Johnson’s transition to head coach?

A. It’s been a great transition. Coach Johnson is the same guy regardless of what roles he’s in. He’s been just as great a head coach as he was as a pitching coach.

Q. Johnson is a passionate baseball mind, but he seems to care about players on a personal level. Is it more about baseball or personal growth? 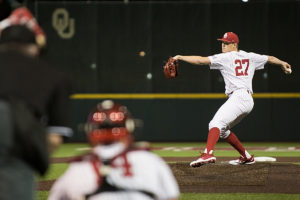 Q. Looking back, when did you know you could play baseball at the collegiate level?

A. I was a late bloomer. I didn’t even start getting recruited until my senior year. I was lucky enough to pitch well my junior year and got some looks that summer. We went to a few showcases and a few schools saw me. I decided that Oklahoma was the perfect fit for me. My senior season, I realized that baseball was my thing, and I found myself working even harder.

Q. How has the support of your family played a role in your success?

A. I think that our love for sports and competitive natures is kind of the reason I push myself to work hard today. (My three brothers) pushed me to be the best I could be, and I love those guys every day for it. All my brothers are athletic. Family is everything to me. My parents are my biggest supporters and they are there every step of the way.

Q. You had so many opportunities to play hockey. How did the Sooners get you on the diamond in Oklahoma?

A. It was a struggle to keep me off the ice. I’m still a huge hockey fan today. Coach (Pete) Hughes saw me at a showcase in Kansas City. He brought me to Norman. I went back to my hotel room here in Norman and told my dad, “Hey I know you might like a few other schools but I’m committing here. Tonight.” So, we got on the phone with Coach Hughes. I loved everything about Oklahoma and I still do. It’s a great fit.

Q. There wasn’t much of a learning curve for you. You basically were thrown right into the fire as a freshman.

A. I think I had the perfect freshman season. I faced a lot of adversity. I learned a lot. Because of that adversity, I got back into a starting role and became a complete pitcher. It’s an experience I’m so thankful for, and it’s made me a better pitcher today. 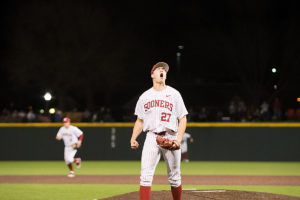 Q. The pitcher/catcher relationship, how important is it?

A. I don’t think it is overstated at all, and it’s the responsibility of the pitcher to build that relationship. We can’t be around them all the time in practice. Off the field, it’s our responsibility to build a relationship with those guys. I was lucky to have Renae (Martinez) last year, and he was an awesome human being, so that was an easy relationship to build. Now, we have four guys this year. They are all awesome guys, good catchers and easy to get along with.

Q. We have seen some incredible physical growth and overall success, but what is the biggest personal growth you’ve experienced as a Sooner?

A. Maturity. You’re in college and there are distractions, stuff going on both on and off the baseball field. You want to be a part of it, but at the end of the day, you’re here for baseball. In a year or two, I could be starting a career, so that’s how you have to look at it.

Q. Do you find yourself having to get fiery with your teammates to fire your guys up?

A. I feel like I can be a confidence builder. Those guys know I’m competing for them, and they’re going to compete for me. They’re doing a great job right now. I pat them on the back and say we’ve got this.

Q. This Sooner baseball squad seems like a pretty loose bunch. How fun is this team and its personality?

A. We have a blast. I think that comes from the fact that we have so many older guys. Some of us have been here for three to four years. The younger guys have grown close to us, and they know our culture. It starts with the guys who were here last year to set the tone, and we definitely have a good time. 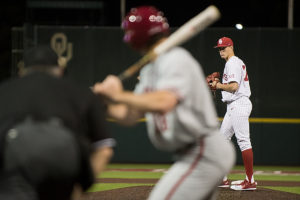 Q. You have a future in the MLB and some even say as a potential first-round pick. Do you find yourself getting caught up in looking forward to that?

A. Not at all. I think coach Johnson does a good job preaching a one pitch at a time mindset. Focus on the now. Take care of business now, and everything down the road will take care of itself. Once it’s over, I hope I can look back and tell myself I gave it all I have.

Q. What are you following away from baseball?

A. Anything associated with sports. I’m a huge Minnesota sports fan, Vikings, the Wild you name it.

Q. What about the 2018 Oklahoma Sooners? Where is this team right now, do you feel good about it?