Thanks to a win last Saturday at then-No. 3 Wichita State and Trae Young’s NCAA record-tying 22-assists explosion versus Northwestern, the Oklahoma Sooners and Young are turning into the talk of college basketball. They are back in action tonight at 6 p.m. when Big Ten foe Northwestern visits the Lloyd Noble Center. Let’s dive into this matchup.

Northwestern and Oklahoma meet for the first time tonight 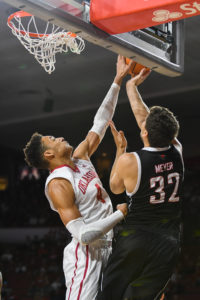 The 6-foot-5 guard is averaging career-bests at 15.8 points per game and 43.8 percent shooting from the field. He’s no slouch behind the three-point line either. Lindsey is connecting on 38 percent of his 3-pointers. He’s actually shooting more trifectas than he ever has. For example, last season Lindsey shot 180 threes over the course of the entire season. He’s already attempted 92 treys this season, which means he’s knocking down 2.7-of-7.1 three-point attempts per game.

Junior forward Vic Law has been the more efficient shooter from downtown, though

A South Holland, Ill., native, Law doesn’t shoot as many 3-pointers on average, but he shoots it more efficiently than Lindsey. He is knocking down 47.3 percent of his three-point attempts and taking an average of 4.6 treys per game. The 6-foot-7 swingman is the team’s second-leading scorer at 13.7 points per game.

Northwestern has a good point guard, too

Senior point guard Bryant McIntosh is also one of the nation’s best. The 6-foot-3 guard comes into tonight feeling good about himself, too. He led the way in the Wildcats’ 85-48 win over Lewis and hit a career-best six 3-pointers in the contest. McIntosh averages 13.4 points and 5.9 assists per game.

Texas Tech blasted the ‘Cats back on Nov. 19 in the championship game of the Basketball Hall of Fame Tip-Off

There’s no shame in losing to No. 21 Texas Tech this season. It’s a veteran, senior-laden basketball team. But, there is a problem when you get housed 85-49 and get held to season-lows in points and shooting percentage (26.7). That’s what happened when these two teams met. Keenan Evans poured in 25 points to lead the Red Raiders’ blowout of then-No. 20 Northwestern. Could it be foreshadowing for another convincing win by a Big 12 squad over the Wildcats tonight?