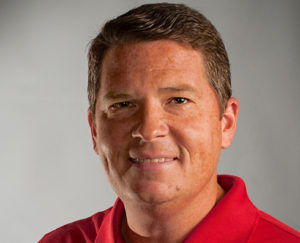 Toby Rowland has been the host of the “T-Row in the Morning Show” since 2004 alongside his Very Best Friend in the Entire World, TJ Perry.

In 2017 he famously became known as the “Voice of the Sooners.” He serves as radio play-by-play for OU football, men’s basketball and baseball, as well as hosting the Lon Kruger, Sherri Coale and Lincoln Riley TV/Radio shows. Rowland also serves as TV host for a wide variety of programming on Sooner Sports TV powered by FOX.

A two-time Emmy Award winner, Rowland spent 12 years as a sports anchor, reporter and producer at KWTV 9 in Oklahoma City. He won the Oklahoma Association of Broadcasters Award for best sportscast and the Society of Professional Journalists Award for Best Sports Reporting. Rowland became a household name in Oklahoma as host of the award-winning “Friday Football Blitz,” taking high school football coverage to a new level in the state.

Rowland’s play-by-play résumé includes serving as the “Voice of Southern Nazarene University” football, basketball and baseball, and as “Voice of the Norman Tigers.” Rowland also was a part of the Oklahoma RedHawks broadcast team for two seasons.

A 1995 graduate of Southern Nazarene University, Toby is married to his college sweetheart, Jennifer. They have three children: Trevor (22), Payton (20) and Chloe (13).

Toby is also the author of the best selling children’s book “Unhitch The Wagon” a story book about the famed Oklahoma Football ponies Boomer and Sooner. A delightful book for Sooner fans of all ages!