By Perry Spencer on May 24, 2018 in Community Articles

Andrews Park is the beating heart of activity for the city of Norman, with its open-air amphitheater, splash pad and skate park, all within a one-block area between Acres and Daws streets.

Even though it’s always active, the park is perhaps busiest during the spring months, hosting the May Fair Arts Festival and Jazz in June. Crowds have been flocking to enjoy culture and the outdoors at the park since Norman’s earliest beginnings.

The park was included on the original plat of Norman, which was filed on Nov. 8, 1890. City Park, as it was known then, was the focal point for picnics and holiday celebrations, especially on July 4. 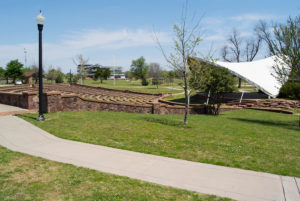 With the rapid expansion of automobiles in the 1920s, City Park gained a new role as a campsite for America’s generation of free-wheeling travelers. John Womack’s Cleveland County, Oklahoma Historical Highlights says city officials in 1923 embraced the idea of overnight camping in City Park, and they funded construction of restrooms, showers, brick ovens and hydrants.

Locals soon decided they would rather see the campground moved northward, and in 1925 a federation of women’s clubs redesigned the south end of the park as a children’s playground and garden. With so much activity, the park board appointed City Park caretaker J.A. “Abe” Andrews as the city’s superintendent of parks.

James Adron Andrews was born March 5, 1884, in Collins County, Texas. He was one of 10 children of William and Tobiatha Andrews, in addition to five step-siblings.

In 1889, the promise of new land in what would become Oklahoma drew William Andrew’s attention, and he made the move, leaving behind many of his children, who were already adults with families of their own. But 5-yedar-old Abe Andrews found his new life in Oklahoma Territory, living with his Dad in a land-run dugout.

Ultimately, William Andrews prospered in Norman, serving as a school superintendent, preacher and the first Justice of the Peace of the State of Oklahoma in 1907.

While much of the country struggled in the Great Depression, Andrews worked to make the public space in his charge serve Norman. The tourist camp was expanded to draw income from out-of-town visitors, and park workers established a zoo nearby. Norman residents came to the park for festivals, celebrating everything from watermelon harvests to outdoor movies.

The biggest additions to the park came during Andrews’s tenure with the Works Projects Administration, Federal Emergency Relief Administration and National Youth Administration. In the late 1930s, the government approved construction of the 2,200-seat amphitheater that continues to be a major feature of the park.

While the original wading pools that were completed in 1937 are gone, the old native stone bathhouses still stand at the park’s south end. One has been remodeled as a picnic pavilion and the other continues to cool park visitors on hot summer days as part of a splash pad.
Mindful of practicalities like drainage issues, the government programs also established the long-running ditch that controls overflow water in central Norman.

After 30 years of dedication to Norman’s parks, Abe Andrews retired in 1956, and the city officially renamed the park in his honor. Appreciation for his many efforts continues, including a chainsaw-sculpture of him made from a tree trunk by artist Clayton Coss.

He was buried in the IOOF Cemetery on Norman’s north side, and his tombstone is marked “Supt. Andrews Park.” It is a memorial to his legacy of building and preserving a space that serves the community of Norman to this day and for years to come. – BSM