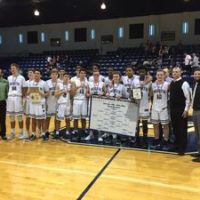 SHAWNEE — It was Batman and Robin stuff and the rest of the Timberwolves were reasonably good, too.

Still, who was Batman and who was Robin Saturday night in the championship game at the Shawnee Invitational?

Fifth-ranked Norman North got all it wanted from 10th-ranked Sapulpa, trailing by 11 points at the half and and still by seven after the Chieftains opened the